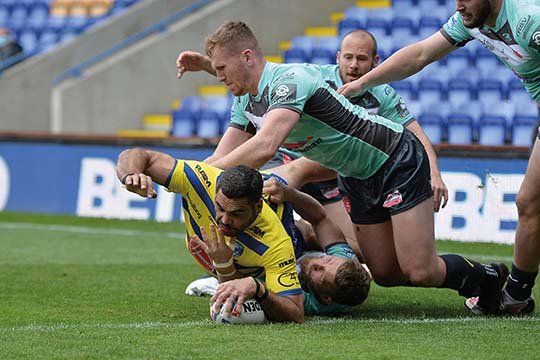 It’s not just Warrington who will benefit from Greg Inglis’s presence this season.

Smith’s Hull KR were on the receiving end of the Inglis effect as the 34-year-old former Australia, Queensland, Melbourne Storm and South Sydney ace marked his long-awaited Warrington debut with his 200th career try in Saturday’s 50-26 win at the Halliwell Jones Stadium.

“I’d rather he hadn’t shown his skills against us, obviously,” said Smith in the wake of Warrington’s third league win of the season.

“But for the good of the competition, I think him being over here is great.

“I have seen some good players, and he’s right up there, in fact in his best form, I’m not sure if I’ve seen better.

“I’m certainly excited about seeing how he progresses and whether he can reproduce some of that old magic.”

In his first game in more than two years, Inglis started in the centres before switching to fullback when Matty Ashton was forced off by an ankle injury.

Wolves coach Steve Price, now preparing for Friday’s Challenge Cup quarter-final meeting with Catalans at Headingley, said: “For his first hit out, I thought he did a really good job for us.

“It’s like riding a bike, so we wanted to make it an easy transition for Greg.

“He did the basics well and then unfortunately Matty Ashton went down with his ankle and he switched to fullback and created a high level of calmness among the group, which was really pleasing.”

Inglis said: “First half I was below par, probably a four or five out of ten. Second half, it would probably be a seven.

“From the team and boys here, there was no pressure on me to perform the way I used to. But the only way I could improve was to get back into it in the second half and I felt I did that, but the team did that as well.

“We’ll just keep going week to week and I’ll obviously get better as the weeks go on. I’m sure the team will as well.”

Meanwhile, Australian halfback Blake Austin could be on his way out of Warrington once his contract finishes at the end of this campaign.

The 30-year-old former Canberra player, who is in his third season in Super League, hasn’t been selected for Warrington’s last two matches, and has reportedly been made available to other clubs for 2022 onwards.

And reports at the weekend suggested that Wolves hooker Daryl Clark is on the verge of signing an NRL contract with the Gold Coast Titans from next season.