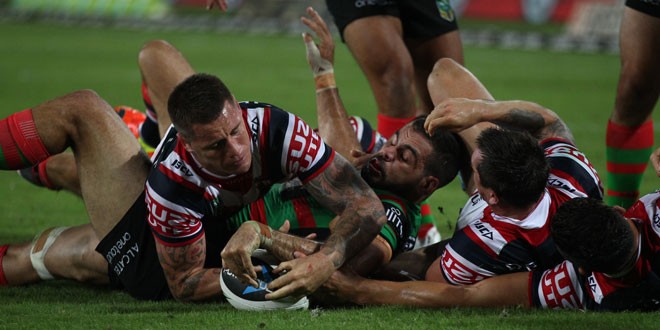 The highlight of the game was a superb hat-trick of tries by the Rabbitohs’ World Cup star Greg Inglis (pictured).
The Rabbitohs emerged well on top, despite going down to an early Roosters’ try by Michael Jennings, although they replied through Inglis, and with both tries being converted the score was tied at 6-6 at half-time.
In the second half the Roosters went ahead again with a James Maloney penalty, but after that it was one way traffic, as Inglis scored two more to achieve his hat-trick, while Bryson Goodwin also scored, while Adam Reynolds added all the conversions and two penalties.
It was a sobering experience for the Roosters and their coach Trent Robinson, after their 36-14 victory over Wigan in the World Club Challenge two weeks earlier.
The game attracted a crowd of 27,282, which was below pre-match predictions, but was cut down by a major storm that had affected Sydney earlier in the day.

Full coverage of the opening round of the NRL will feature in Monday’s Rugby League Express.