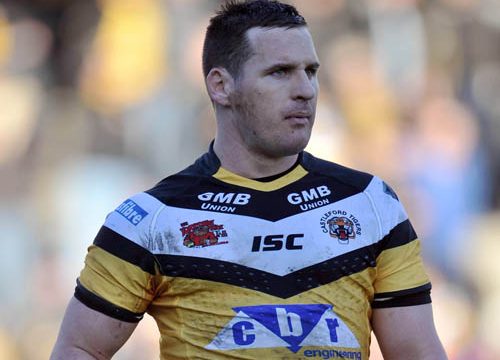 Castleford Tigers have released Brett Seymour from his trial period at the club.

Speaking to the media on Thursday ahead of the Tigers’ game against Wigan Warriors on Sunday, Tigers coach Daryl Powell explained why the decision had been made.

“We sat down and had a chat with Brett and came to a mutual decision that we would release him from his trial period,” Powell said.

“Our season has started pretty well and with Marc Sneyd, Liam Finn and Jamie Ellis in front of him, it left him fourth in line.

“We wanted to give Brett the best opportunity to get a club because with the way rugby league is at the moment, he just can’t play it and that’s disappointing but that’s just the way it is.

“He has been fantastic while he has been here; he fitted in well and got on with the players and he has worked really hard.

“If you speak to him then he’ll be full of praise for our players and the work that we have done with him to enable him to have an opportunity.

“It’s disappointing for us and Brett that it hasn’t worked out, but that’s life sometimes and our excellent start to the season has made it more difficult for him to get in the team.

“I’m hoping that he will get a club in the near future and we wish him all the best.”