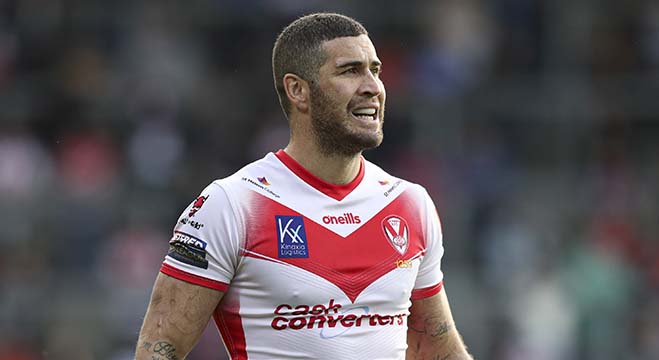 ST HELENS have confirmed reports from Down Under that their Australian secondrower Joel Thompson is to cut short his time in Super League.

The 32-year-old will retire at the end of the season with a year left on his contract.

He has been a regular in Kristian Woolf’s line-up, playing eleven times, but is to return home for personal reasons.

Thompson said: “Firstly I want to thank everyone at St Helens for giving me the opportunity to play for this great club. I want to thank the players and of course the fans for welcoming me so openly.

“I also want to pay thanks to Kristian Woolf for putting his trust in me and for the way he has looked after me since I came over here.

“It’s not been an easy decision for me to call time on my career, but I do feel the end of the season is the right time to do that.

“I will make no secret of the fact that although my short time over here in the UK has been enjoyable for me personally, it has been extremely tough for my family both here and in Australia with everything that is going on right now.

“Family comes first for me and that is ultimately why I am making this tough decision to return home at the end of the year.

“I want to wish the club all the best in the years ahead, but my job is not over yet as I want to finish my year here with success both at Wembley and in the Super League. All my focus is on achieving that with St Helens.”

Woolf said: “I knew when we brought Joel into the club what a professional he is and working with him has only emphasised that to me.

“He has vast experience and he is such a tough competitor. That’s what makes him the player he is and that is why he has such a glittering career.

“Over the short time he has been here we have really valued his input and his influence amongst the group.

“I know how tough it has been for Joel’s wife Amy and the girls, but they fit into this club really well and we all thoroughly understand and respect his and his family’s decision. We now want to support Joel and his family to ensure they enjoy the rest of their time with us.

“Joel is not finished yet though and I know he is fully focussed on achieving success with this group this season.”

Born in the remote New South Wales town of Ivanhoe, Thompson became an Australian Schoolboys representative player in 2006 before joining Canberra, who handed him a debut in 2008.

He made the first of seven appearances for the Indigenous All Stars in 2010 and the first of two for the Country Origin team in 2011 before joining St George in 2014. He played for Manly from 2018-20.

An influential figure off the field, he is a strong advocate for both Indigenous voices and mental health, founding The Mindset project in 2012 and being awarded the NRL’s Ken Stephen Medal in 2016 for his community work.