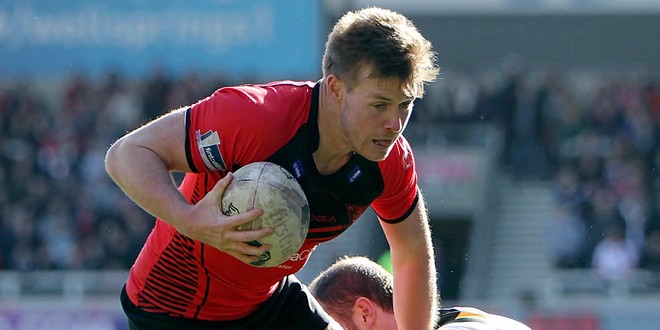 Salford full-back Jake Mullaney has admitted he doesn’t know why the Red Devils have been so inconsistent this season, after his side fell to Hull FC 30-8 on Friday night.

Salford were well beaten by the Black and Whites at the KC Stadium and struggled to trouble the committed Hull FC defence. It was the Red Devils’ fourth loss of the season and they now meet Hull FC again in the Challenge Cup on Thursday night.

“We just didn’t play as well as we can, which is disappointing,” Mullaney said.

“We’ve been pretty inconsistent all year, but I’m not sure why. We trained hard leading up to the game. But it’s hard to take any positives from the match. Our defensive work wasn’t as good as it can be.”

Salford started the season with wins over Wakefield and London but have now won just one of their past five matches.

Mullaney, who joined the Red Devils from Parramatta at the start of the year, said coach Brian Noble was disappointed with the defeat.

“We’ve had a lot of personnel changes, but players are starting to filter back in. After the win over Cas I thought we’d turned a corner. In fact we are still gelling. We struggled to get a pre-season in. We’re at least a month away from properly gelling as a unit.”

Mullaney has scored one try and made 728 metres with the ball, the most of any Salford player, during the first seven rounds. The 23-year old is in his first season Super League and admits he has been impressed by the competition.

“It’s really physical. I’ve been trying to get my body right each week after the game. It’s not really as slow as many people say, it’s pretty close to the NRL.”

And he doesn’t believe that outside pressures and expectations, including from club owner Dr Marwan Koukash, are affecting the team’s performances.

“We try not to talk or think about it, and it’s hard for me to comment on it,” said Mullaney.

The Red Devils play Hull FC again on Thursday night in the fourth round of the Challenge Cup. Mullaney expects recently returned Hull FC halfback Jacob Miller to come under close attention from the Salford coaching staff.
“They played very well against us,” he said.

“A lot of things they tried came off for them. Jacob controlled the game well for them. We need to put him under some more pressure.”