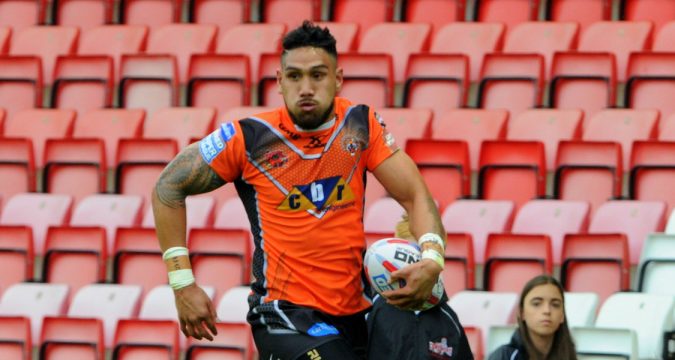 Castleford Tigers favourite Jesse Sene-Lefao has made a request to the club… a new contract!

The 28-year-old’s deal with the club expires at the end of the season and the popular forward has yet to secure his future with the club.

However, the Samoan international is desperate to stay with last year’s defeated Grand Finalists, after establishing himself as one of the competition’s most likeable characters.

When asked about his contract situation, Sene-Lefao cheekily said: “Someone give Cas a nudge to sign me up!

“I want to stay. My family is happy here but there are a few things they need to sort out upstairs. I just have to worry about football, that’s why I’m here, I’ve come to do my job. Everything outside of football will look after itself.”

His maiden season with the club proved to be a massive success both on and off the field.

On it, Cas won the league for the first time ever, while off the pitch, his family transitioned to life in England seamlessly and he had a new child with his partner.

The one thing that eluded him was a Grand Final triumph. But he’s no doubt Cas will change that in 2018.

“Everyone trains for those games and that is the end goal. Our goal this year is to be humble, focus on each game at a time and learn from our mistakes last year. Hopefully we’ll be better for it.”