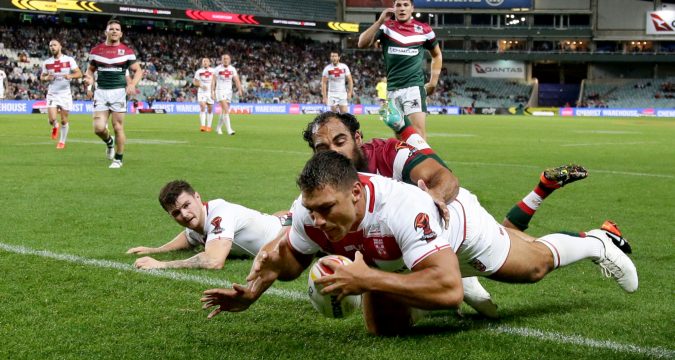 The first of England’s World Cup squad on the list, the veteran halfback is off-contract at the end of the season after signing a two-year deal with the Wolves following his move from Widnes.

Brown will be 34 by then and it remains to be seen whether he will play on after that. Should he bring his England form to Super League this year, he’ll certainly have something to contribute beyond 2018.

Super League’s leading try-scorer is yet to secure his future beyond this year, although he has confirmed that he is in advanced discussions with the Tigers regarding a new deal.

After his efforts last season it’s inevitable that he’ll attract interest from elsewhere, but whether there’s an offer out there to lure him away from Castleford is a different question altogether.

He’s proved to be one of Super League’s all-time greats, but Ryan Hall still finds himself out of contract at the end of the year.

It’s impossible to think he won’t be offered a chance to stay at Leeds. Even if he isn’t, he’ll find a club elsewhere.

Huddersfield’s star man of 2017 is set to have a lot of interest should he not have sorted his future with the Giants by May.

After making the Dream Team last year, Ikahihifo is tipped for another massive year. That might just make him catch the eye of clubs on both hemispheres.

The good news for Huddersfield? Rick Stone has already confirmed the club is in talks regarding a new contract. Another Dream Team member, Albert Kelly’s future is already in doubt after he confirmed he had “unfinished business” with the NRL.

After his performances last year, Kelly is likely to have landed on the radar of some NRL clubs. Should he play consistently well again, the Black and Whites may have a fight on their hands.

Mamo is another player that has cast doubt on his future by admitting he isn’t sure what the future holds for him beyond the end of the season.

Fullbacks are a hot commodity on the market and as a result, Mamo won’t be short of options. He admitted he’s happy at Huddersfield, but whether he remains there after the year passes by is yet to be decided.

Moon’s transition to a halfback has further elevated his stock after Leeds’ latest Grand Final triumph.

Still only 29, Moon is a massive asset with loads of Super League experience and will be one of the first names on every other club’s wishlist if he’s still off-contract come May.

The recently appointed Saints captain is yet to sign a new deal at Saints.

As a one-club man, you’d have to expect that should Roby not sign a new contract, it will signal the end of his career.

That said, Roby is playing far too well to consider hanging up the boots just yet, and you’d expect Justin Holbrook will tie him up soon.

‘The Beast’ has barely arrived in Super League, but he’s already having to think about his future.

Salford’s fierce winger proved to a popular addition to Ian Watson’s squad last year and he’ll be expected to be at his destructive best next year.

But what about beyond that?

It’s the transfer story that promises to be the biggest of the entire year.

Alex Walmsley’s future is already a massive talking point after rumours linking him with a number of NRL clubs.

It’s easy to see why. He was near unstoppable in Super League last year and was outstanding in the World Cup.

Saints are desperate to keep him too. The question is, what does ‘Big Al’ want himself? Only that will decide where his future lies.