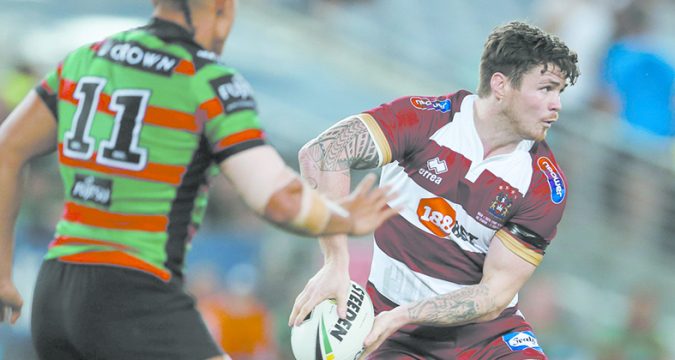 England international Bateman was photographed with the Sharks head coach during the club’s tour of Australia, alongside Wigan team-mate Ryan Sutton.

The 24-year-old still has two years remaining on his Wigan contract, but it contains a clause that permits him to speak to NRL clubs about a potential move down under next season.

Breaking his silence over the situation, Bateman admitted that he is considering a move to the NRL, with several clubs interested in signing him ahead of 2019.

However, he said that he is also keen to speak to Wigan, although the club hasn’t approached him about a new deal yet.

“The pictures have come out now and there’s not much to cover it up with,” said Bateman.

“I’ve got a clause in my contract that allows me to speak to Australian clubs.

“I’ve always stated I want to stay at Wigan and I’m willing to speak to them if they put a contract on the table. But I’ve not heard anything from them yet. I’ve got a young family and I don’t want to get to October and be deciding if I’m going to Australia or not.

“You don’t want to put all your eggs in one basket, but it’s about getting out there and talking to people, which that clause allows me to do. I haven’t heard anything back from Wigan yet, so on the other hand you have to find out what the options are.

“It’s just meeting up with people and seeing what interests me and them. I’ve got a young family and I have to think about my little girl. It’s getting things in place before it’s too late. It’s a wait and see game.”

Even before breaking onto the scene as a teenager during his Bradford days, Bateman was on the radar of clubs in Australia, and the interest has never waned as a number of clubs prepare to enter a race to secure his services.

But the birth of his daughter meant he took the decision to remain in England.

“When I had a little girl I wanted her to grow up with her dad in England,” he said.

“That’s what pushed me to stay. As I get older and she gets older we talk about more things.

“There’s been a couple of clubs speaking to my agent. He speaks to them on my behalf and he relays it to me. You would start worrying if there was no interest.”