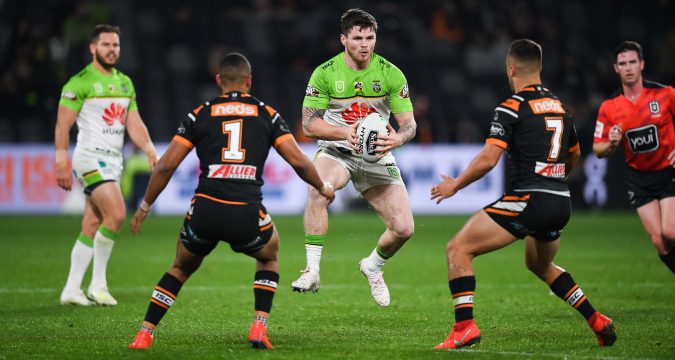 John Bateman has admitted he would consider seeing out the rest of his career in the NRL, casting doubt over a future return to Super League with Wigan.

Wigan stated last year that when Bateman had agreed to join Canberra on a two-year deal with an extra year option, he had also agreed a three-year deal to become one of their marquee players when he returned to Super League.

Bateman was even quoted in the Warriors’ statement at the time saying: “Although I’m sad to be leaving the Warriors, it’s great to know I’ll be returning here in a couple of years.”

However, he has admitted to League Express that, despite initially struggling to adjust to life in Australia, he now has no immediate plans to return to England.

The Great Britain international said: “When I first got to Canberra I thought I wanted to go home, but as I’ve settled I’ve really got to know the place over the last three or four months. I originally just wanted to come here and see my two or three years out, but I’m enjoying life over here, and I call Canberra home now.

“I miss my family, of course I do, but they have the chance to come out here and see me quite often. Maybe one day I’ll come back to Super League, but genuinely if I played out the rest of my career here, I think I would be happy to do so.”

Bateman’s future has been heavily scrutinised in recent months, after a story concerning him emerged in the days leading up to Canberra’s NRL Grand Final defeat to Sydney Roosters. The story suggested that he was seeking a significant upgrade in his contract at Canberra, while he would also consider moving to another club for a better deal.

Bateman has recently joined forces with renowned Australian player agent Isaac Moses, but he has insisted that he did not intend the story to be published at such a crucial stage of the Raiders’ season.

He said: “I got asked questions about what I would do that was best for my family. But then it looked like I was coming out and demanding more money when I was already in negotiations with Canberra. It was never intended to come out in Grand Final week.”