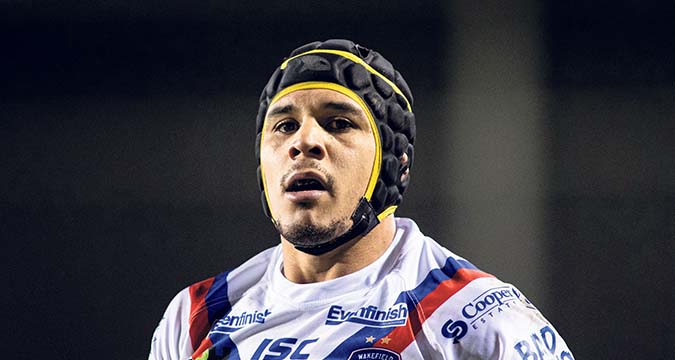 Ben Jones-Bishop has several reasons for wanting to return to the field in 2021 – including lining up alongside his brother in the World Cup.

The 32 year old winger is currently without a club after rejecting a deal to stay at Wakefield in the pursuit of a new challenge.

Jones-Bishop has fielded interest from Super League and the Championship since then, but insists he will not rush into a decision on what could be one of his last Rugby League deals.

He is, however, focused on pulling on the shirt of Jamaica again when they make their World Cup debut this autumn, hopefully in the same team as fellow winger and his brother, Hunslet’s Aaron.

Jones-Bishop, who qualifies through the grandparents on his mother’s side, said: “It’s a big part of it, wanting to be involved.

“It’s been a great journey over the last couple of years alongside my brother and others who have been on it for many years before that.

“There are two games in Leeds and there’s a big Caribbean community in West Yorkshire, so hopefully spectators will be back by then and it’ll be a vibrant atmosphere.

“The domestic game in Jamaica is getting stronger all the time; you can see that when the boys from there come over.

“They’re playing at a higher standard, and it would be great to be involved with them in a World Cup.”

When Covid-19 restrictions allowed, Jones-Bishop was training with his brother as he keeps fit and waits for his next opportunity.

The former Leeds, Harlequins and Salford player has stressed there are no hard feelings at all with Trinity, but he wants to test himself in a new environment.

“The last 18 months have been good for me mentally,” explains Jones-Bishop, who has overcome blood clots in his lungs and a fractured skull during his career.

“After being out for a long time I had chance to reflect on things, and I wanted the opportunity for a new challenge and to see what was out there.

“We’ve spoken to some clubs in Super League and the Championship, and with the season getting pushed back everything is a bit up in the air and teams don’t really want to commit, which is understandable.

“But I’m not in a rush to take a low-ball offer – I’m happy to keep fit on my own and be ready for any opportunity that comes along.

“I thought when I came back last year my performances showed I still have plenty to offer.

“I still think I can be a good player in my position and offer things to a team.”

What the extended break has allowed Jones-Bishop is the chance to focus on the property business he manages.

The Leeds Academy product has paid tribute to his long-term agent Craig Harrison for his help in establishing that in West Yorkshire.

“He likes his boys to look at things outside of rugby.

“At times I’ve probably made his job hard for him because I’d be changing my mind and going backwards and forwards.

“It’s great to have somebody that you know you can rely on and who does what he says – he delivers, he doesn’t just talk.

“It’s been great working with him and his guidance with the property business was really good when it started.”