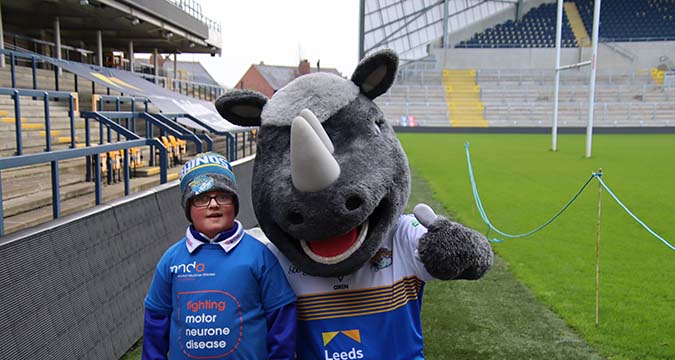 Leeds Rhinos fan Isaac Lawley may be only eight years old, but, inspired by Kevin Sinfield’s 7-in-7 challenge for Rob Burrow and the motor neurone disease charity MND, Isaac has completed his own seven week challenge and has raised over £3,000 for the MND Association.

Isaac, a Batley Boys junior player, set himself the target of running a mile a day for seven days, before then deciding to keep running every day for seven weeks, including Christmas Day. To finish off in style, the youngster ran two miles on the final day from the Rob Burrow mural in Leeds City Centre to his beloved Emerald Headingley Stadium to bring up the 50-mile marker for his challenge. He even had enough energy left to do a lap of the famous Headingley pitch with team mascot Ronnie the Rhino.

Before Isaac set off on Sunday on his final run, he received a message from Rhinos legend Sinfield, who raised over £2.6 million from his seven marathons.

“It is amazing to have finished,” said Isaac on reaching the finishing line.

“It has been really enjoyable. The best bit was definitely running at the stadium with Ronnie the Rhino. I am really proud to have raised so much money. My friends have told me I have done a great job. It was fun running in the snow.

Isaac’s dad Richard added, “The whole family are really proud of his achievements. It is not just about the money he has raised but the awareness he has gained for MND and Rob Burrow. We started doing a bit of running during lockdown with all his usual after school clubs closed and he wouldn’t run much further than the end of the road, but on his final day today he has run over two miles and he could probably keep going. He has inspired the whole family to get out running.”

But Isaac is not resting on his laurels; he is already working on plans for his next fundraising initiative. He added, “We are looking to do a mile a day on bikes for seven days next and then in the summer we are hoping to arrange a tournament with seven teams playing seven minutes each half.”