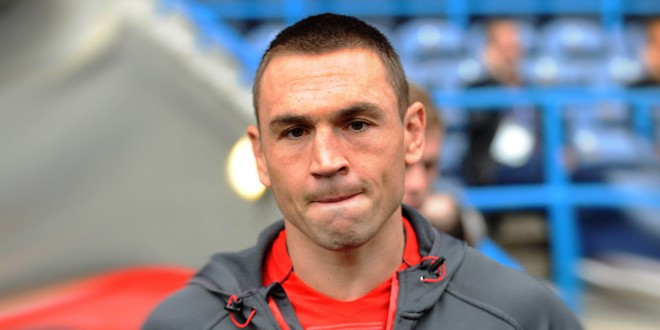 International Rugby League, at the top strata, is formally back on the agenda.

The long-delayed announcement of the 2014 Four Nations, which will see England face the Pacific qualifiers in a Brisbane double-header, Australia in Melbourne and New Zealand in Dunedin, with the final at the ‘Cake Tin’ in Wellington on 15th November, has re-ignited the World Cup feelgood factor, not least for the players.

Current England skipper Kevin Sinfield is one who is hoping to be involved.

“It’s taken some organising and there have been logistical problems with putting together dates, but finally it’s in place. It is a fantastic carrot for all England qualified players,” said Sinfield in the aftermath of Leeds Rhinos’ win over Wakefield on Friday. “Everyone can now look forward to it. We fell short in that [World Cup] semi final, but were very, very close. Unfortunately it is going to take a year until we get our chance to test ourselves at that level again but, hopefully, we can rise to the challenge.”

There is still talk of a possible warm-up game in Papua New Guinea on the way through and a couple of new venues to anticipate.

“I’ve never been to New Zealand so, if I manage to get in the squad, and everything goes well, it will be a great trip,” Sinfield added.

“The group understands what we are faced with when we play New Zealand and Australia, particularly in their back yard and especially with Steve [McNamara, England coach] being down there and having a real close eye on what’s going on.”

“Add our English NRL-based players to some of the great young talent that’s coming through in our competition and there will be a great mix. You throw that all into the cauldron and include some of the players who had a great World Cup and there are some really positive signs,” he continued.

Missing, though, will be Sam Burgess who, by then, will be preparing to return home and play for rugby union side Bath, which Sinfield acknowledges is a blow.

“It’s disappointing to be losing him. Steve said he was the jewel in our crown and I certainly echo that. He was unbelievable in the autumn and will be a huge loss.”

“But that means there’s an opportunity for someone else. Somebody will stick his hand up to take Sam’s spot, grasp it and do a great job.”

In typical Sinfield fashion, and despite enjoying his best international run of form under the current regime, the Leeds skipper is not taking for granted that he will retain the national captaincy.

“I wouldn’t want anything less, and if I’m playing well enough and deserve to be in, great,” he said.

“If I’m not, I’ll take it on the chin like everyone else who isn’t selected.”

“But I certainly want to be a part of it. What Steve has created, with the RFL’s backing, means it is a great environment. With the support we had during the World Cup, it has made people proud of England Rugby League again and I’d like another crack, especially with the challenge of it being down under. But it’s all on form.”

Prior to 2013’s heartbreak Sinfield had already confirmed that it would be his last World Cup. But many thought that the crushing disappointment with which it ended might see the 33-year-old retire from the international arena.

“It crossed my mind before, but not for long,” he added.

“I feel like I still have something to offer and if Steve McNamara feels the same way at the end of the year, that will be fantastic.”

“If not, then I’ve been very, very fortunate to represent my country on a number of occasions. There’s no higher honour than to captain your country, so I’m hugely proud.”