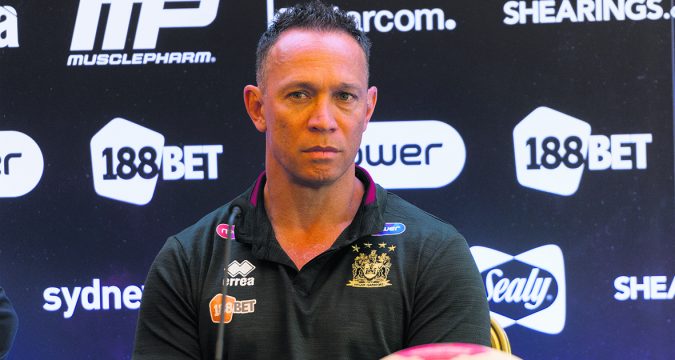 Adrian Lam was disappointed to see his side fall away in the second half as Wigan last to Salford.

The Warriors were 14-2 ahead at half-time but conceded 16 unanswered points after the break to suffered their second defeat of the season.

“The first half was some of the best rugby we’ve played this year,” he said.

“That’s why I’m a little bit confused about the performance. The first 50 minutes were outstanding and if Bevan French scores it’s a completely different ball game. Fifty minutes was solid and 30 minutes was just scrambling, trying to rescue the game at the end.

“I guess if there’s a lesson to be learned tonight, it’s that when we earned that right, we should have played more rugby. We kept it really simple when I thought that we could have moved the ball more.

“We just took the foot off the accelerator and let them back in the game with a couple of penalties that helped them out of their zone.

“They’re really disappointed in the dressing room. They know that we worked really hard to get the lead we needed and then I think we could have strangled them better in certain situations.”

Lam also revealed that Zak Hardaker had missed the match due to a hamstring problem.

“Zak pulled out yesterday afternoon with a strain to his hamstring. We could have played him, but we just want to be cautionary there. It was his call in the end.”