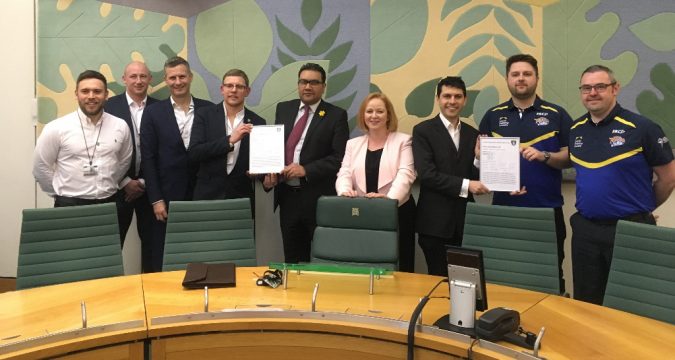 On Wednesday afternoon, the local Members of Parliament for Warrington Wolves and Leeds Rhinos welcomed Adam Hills, host of the show The Last Leg’ and representatives from both clubs, to Parliament to celebrate the first ever Physical Disability Rugby League match in the UK.

Physical Disability Rugby League is a modified version of the game which features both full contact and touch tackle options which allows players who have physical disabilities to participate.

The first match, played between Warrington Wolves and Leeds Rhinos, was on Sunday 4th February with Adam Hills playing for Warrington.

Speaking after the visit, Member of Parliament for Leeds North West, Alex Sobel MP, said “it was a pleasure to welcome Adam Hills are representatives from the Leeds Rhinos and Warrington Wolves Foundations to Parliament, and hear about the fantastic work that has been done to establish Physical Disability Rugby League in the UK.”

All-Party Parliamentary Rugby League Group Chair and Member of Parliament of Bradford South, Judith Cummins MP, also attended and said “the All-Party Parliamentary Rugby League Group is committed to supporting and promoting all formats of the sport, and it is great to see the work that is being done to provide more opportunities for those with physical disabilities to take part in the sport.”