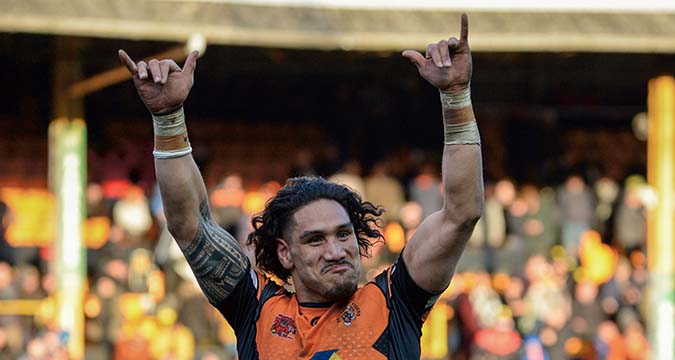 THE WAY FORWARD FOR RUGBY LEAGUE

I join Martyn Sadler in calling for a Commission to investigate the best way forward for the governance of Rugby League (Talking Rugby League, 8 February).
For as long as I can remember this great sport has been run terribly, missing every opportunity presented to it. That can’t be just be that the people who run it are hopeless, although perhaps they are; including Robert Elstone who was singularly unimpressive as the leader of Super League.
As Martyn suggests, and has suggested several times in earlier articles, it’s the constitution and structure of Rugby League governance that clearly seems to make the sport act against its own best interests. So many supporters are disillusioned, not by the game itself, but by the way it seems to be forever stuck in a rut without being able to find its way out.
The game has to break out of this cycle, so if Lord Jonathan Caine is the best man to chair an inquiry into securing the road ahead, I would give my full support to such a move.
Bill Rees, Wakefield

I suspect the writing has been on the wall for some time regarding Robert Elstone’s role in Super League, and I hope some sanity will now be restored to the hierarchy, with the whole of Rugby League once again encompassed under the umbrella of the RFL.
Ralph Rimmer and his team can now boost the game’s income, particularly from the broadcasters in this World Cup year, and try to increase sponsorship. As Martyn Sadler has written numerous times, the game cannot afford two executives each with their own teams.
Ian Haskey, Castleford

PERFECT TRIBUTE TO SIR TOM
I was delighted to read Garry Schofield’s suggestion (Pulling No Punches, Feb 8th) that, if granted permission by the Moore family, the Rugby League World Cup final Man of the Match trophy should be named the ‘Captain Sir Tom Moore Trophy’, and be presented to its first ever recipient following the Grand Final, at The Theatre of Dreams, on Saturday 27 November.
‘Captain Tom’ captured not only the hearts of our nation, but the hearts of the entire world. What better tribute could our game pay to a wonderful man, whose brilliant fundraising efforts during the first coronavirus lockdown resulted in him raising more than £32 million for NHS charities.
As many League Express readers will already know, ‘Captain Tom’ – who was born in the Rugby League town of Keighley, in 1921 – sadly passed away away on Tuesday, February 2nd. If the Moore family should for some reason decline such a moving tribute (assuming Garry’s idea is accepted by the powers within the game), then perhaps another name for such a trophy could be the ‘Cougar Cup in honour of Sir Captain Tom Moore’. I am sure that would raise no complaints from the fans of this great club, which came into existence in 1876, some 45 years before the birth of our latest and forever to be remembered national hero.
Well done to Garry for his great idea.
Richard Sanderson, Beadnell, Northumberland

SHIRT GIMMICKS
Congratulations to Hull FC, Leigh and St Helens on their shirt designs for 2021. They all maintain their strong individual and traditional identities, and still allow clear sponsorship on their shirts. Warrington’s and Catalans’ shirts are not far behind.
In contrast, Wigan’s badge lettering ‘Ancient & Loyal’ is in complete contradiction to their poor, new rebrand, which League Express rightly comments may take a while to get used to.
The Castleford and Wakefield new shirts are no better and nondescript. Hull KR, Huddersfield and Leeds are trendy and do at least use their traditional club colours, but will soon look dated. The Salford Red Devils shirt reminds me of a tame Liquorice Allsort.
Oh, I get it! Pick a poor shirt design, and when the novelty has worn off, supporters will want to buy a replacement.
Henry Skrzypecki, Halifax

SUPER LEAGUE NOT FOR ME
Clubs should be aware that when the competition starts again, crowd numbers could possibly have fallen, as many fans will have found other things to do or other places to go, and also that the same old teams will dominate Super League yet again.
If only we could revert to the old Yorkshire, Lancashire and Cumbria leagues. That would bring back local derbies between the top teams, bringing the crowds back with them. Super League is a failure for me.
My first game was in 1935 so I have seen a few.
Norman Rigg, York

NEW REGULAR
As a recent convert to Rugby League, watching it on TV but living in the West Country, I found it difficult to find any reading material about the sport in my local shops.
I discovered your paper online, but online reading is not the same as having the real thing in front of me, so I took out a 13-week subscription and have just received my first paper. What a good read! There is so much information about all Super League clubs and others. I read it from the front to back page in one sitting.
If the remaining copies are as good I’m a permanent reader. Well done to you!
Roger Dicks, Bristol

WANT TO BE A REF?
The St Helens Referees’ Society is hosting a new online course for match officials, commencing this week. The pandemic has made things very difficult for match officials (obviously, as well as for everyone else) but crucially, when the community game is able to return they will need referees to make that happen. In order to restart recruitment, therefore, the RFL has devised an online training course for new officials.
I was fortunate enough, a couple of weeks ago, to be involved as a guinea pig so I can vouch for the concept. There are even several advantages, such as removing the geographical restriction so that, for example, people from London can take part in a course being run by St Helens, and be able to do different modules at different times.
There is no exam aspect to this part of the course and it costs only £10, so it is something that even players and journalists could do, to improve their understanding of the game.
The first course takes place this Saturday (20th Feb) and candidates can register at https://www.sthelensrlrs.co.uk/register/.
Rob Lowe, Hull