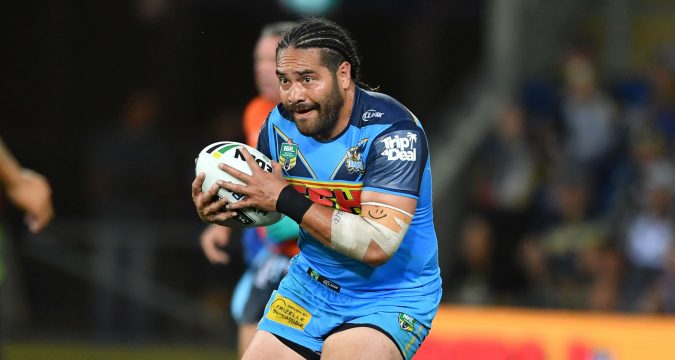 The 27-year-old has signed a three-year deal with the Rhinos in what is a significant coup for the Rhinos ahead of David Furner’s arrival next year.

Hurrell was a pivotal part of the Tonga side that reached the World Cup semi-final last year and was one of Gold Coast’s top performers in the NRL this season. During his seven years in the NRL, Hurrell has scored 55 tries in 116 games.

Leeds are understood to have tabled a huge deal for the powerhouse, which has played a significant role in his move to the club.

Hurrell asked for a release from the Titans which was reluctantly accepted by the Gold Coast head coach, Garth Brennan.

It’s understood the deal will make him one of Leeds’ marquee players, with the other being fellow new arrival Tui Lolohea.

“I’m looking forward to getting to Leeds and especially having the chance to work with Dave Furner again,” said Hurrell, who worked with Furner as part of the Tonga set up last year.

“When I ask people about playing in Super League they always say how enjoyable it is. I just want to play my part in the team and hopefully, we can achieve success together. I have heard that the fans are crazy over in England and that is something that I am looking forward to.

“I have spoken to Dave Furner about what he expects from me and he thinks my style will suit the game over there. I just need to do my job; do the hard running and make my tackles and the rest should take care of itself.

“Part of the attraction for me was the changes that Dave Furner is looking to bring in at the club. He has been looking to recruit quality players to add to the squad and it is an exciting time to be joining the club. I haven’t managed to win a Premiership ring in the NRL but I feel like I am coming into my prime and the plan is to try and help Leeds get back up to challenging for honours so I can achieve success over the next three years.”

The move is also a significant one for Kevin Sinfield, with Hurrell’s arrival his first major piece of business.

“We are delighted to have secured a player of international class like Konrad,” he said.

“Over the years, Rhinos fans have always loved a strong running centre and Konrad certainly fits that bill. I would like to thank Gold Coast Titans for the professional manner in our dealings with Konrad that will allow him to take up this exciting opportunity with the Rhinos.”