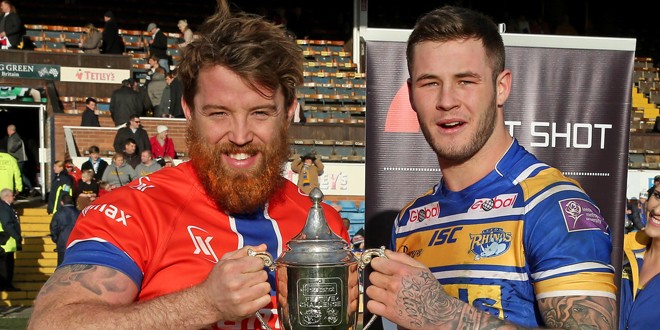 If around 9,000 fans are prepared to pay full price to watch a Boxing Day friendly and keep a tradition going – a figure higher than the 2013 regular season average of nine Super League clubs – then it would be churlish to debate the value of the fixture.

Certainly the fervour with which the Wildcats pointed at the posts with four seconds remaining on the clock – after Liam Sutcliffe had gone high on Ben Shulver 20 metres from the home line – enabling Bobbie Goulding to kick the equalising points, showed that it mattered to the protagonists.

With the Heatshot Trophy duly shared, Wakefield coach Richard Agar postulating mischievously whether that meant a replay to further boost coffers, all parties got something tangible from the exercise.

There was the inevitable element of unfamiliarity especially in the creative roles while the withdrawal of Ryan Bailey with an Achilles injury meant that Leeds began with two second-rowers at prop, affecting their potential go-forward; Wakefield forced late to draft Danny Kirmond and Dean Collis into their starting line up.

With the likely first 17-ers come February adding more of a sprinkle than a sparkle – the Wildcats including a likely eight to Leeds’ five – the focus, in a game that got better as it went on, was again on the future and giving a thrilling taste to the emerging.

Last year in the corresponding fixture, Rhinos fans caught first glimpses of Sutcliffe and Alex Foster who went on to worthily take a place at the top table in 2013.

This time the pair were at the forefront, Sutcliffe carrying himself with calm aplomb and Foster – along with another Super League debutant in Super League XVIII, Elliot Minchella – non-stop.

Among the next Rhinos crop who may follow the same path, Josh Walters is a name to note while for the visitors, former Leeds Academy star Daniel Smith, off the bench, made an impression while, at the other end of the scale, Richard Moore and his inevitable offloads on his second Wildcats debut were a constant threat.

Pre-match, most interest had centred on the swapped hookers, Paul McShane measured and influential in his opening stint in red while Paul Aiton played his way in during his first spell and was commanding following his re-introduction just after the break.

Overall, Leeds coach Brian McDermott was generally pleased with what was on offer, even allowing for a rib injury to Brett Delaney.

“I learned a bit more about the young fellas,” he noted. “Some of them showed up well.”

“It was competitive throughout, not the highest skill level, both teams struggled to get something together on try-line attack.

“I can’t speak highly enough of Zak (captain for the day Hardaker), it wasn’t a symbolic gesture to make him captain, he was the obvious choice and I was pleased with how Paul Aiton came through, he showed one or two glimpses.”

There was little of note in a mainly turgid opening quarter, Peter Fox dropping Zak Hardaker’s bomb but Foster pushing the ball forward when challenging for it, seeing Joel Moon brought back as he crossed.

Sutcliffe’s clever show and go was countered by a McShane touchfinder, Tom Johnstone losing a Hardaker kick into the sun but the Wildcats, in retro style, winning a heel against the head.

The opening score came on the back of Kirmond’s tackle dislodging the ball from Moon on the Leeds ’20’, Matty Wildie, Richard Mathers and Collis sending Fox in at the right corner with some fine handling, Goulding missing the conversion.

On a last-tackle play, Leeds centre Thomas Minns tried a chip over which was pouched by Johnstone. The former Stanningley junior strode clear but Ben Jones-Bishop, who sailed serenely at the back throughout, made the try-saving tackle on the South Stand side.

McShane, Smith and Mathers broke up the middle; Paul Sykes just denied after good work by McShane and Danny Washbrook, which forced the sole drop out of the game.

Just before the break, the Rhinos took the lead after Luke Briscoe had bravely mopped up a McShane grubber.

Jones-Bishop wrestled his way through three defenders from deep in midfield, his inside pass as he fell snaffled by scrum-half skipper Hardaker, who romped 40 metres to the posts and converted.

Sub Chris Annakin added a spark for the visitors after the break but Aiton took centre stage, linking with Mitch Achurch and Hardaker to set the position for Minns to surreptitiously latch on to Sutcliffe’s grubber, Hardaker goaling.

Briscoe did well to stay in play but Jones-Bishop fumbled a Sykes attempted 40/20 and, on the last from the scrum, Annakin grubbered and hacked on after the ball hit Moon’s foot, Wildie following up to cross and Goulding making it 12-10.

Almost immediately, Leeds restored a two-score lead, Achurch, Dan Grange and Delaney on the charge, Aiton’s beautifully smuggled pass putting Chris Clarkson in near the posts, Hardaker again on target with the boot.

Going into the final ten minutes, Minchella knocked on attempting an interception, Kyle Trout made ground and Wildie’s short pass from dummy half saw Jon Molloy power over, Goulding narrowing the gap to two.

Aiton’s kick to touch in the corner with 100 seconds left seemed to have secured his new side the win but Molloy forced Briscoe into a knock on and, in the final play, Sutcliffe’s indiscretion allowed Goulding to level.

For Richard Agar, who apologised for his side going for goal at the death, there was something to build on.

“It’s early days and was more a case of blowing some cobwebs off,” he said. “There were some good individual efforts and, as you would expect this time of year, it was difficult to expect our attack to flow too much.

“We played well out of dummy half, that’s where our most promising football came on the back of.”

“All in all, defensively we worked quite hard and looked pretty solid on the edges so it served its purpose, everyone’s had a run out and we’ve had a look at some of the new guys.”

Ben Jones-Bishop was assured throughout but Liam Sutcliffe looked comfortable in the dictator’s role, further emphasising his claim for a place in the Leeds starting 17 in 2014.