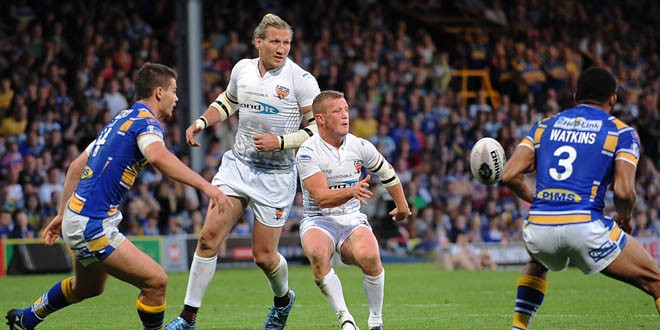 Leeds Rhinos will be looking to continue their perfect start to the new Super League season tonight, when they lock horns with winless West Yorkshire rivals Huddersfield Giants.

Wins for the Rhinos against Hull KR and Widnes have left them two from two so far in 2015, whereas Huddersfield are coming into the game off the back of defeats to Hull FC and Wigan Warriors.

SINFIELD TO MAKE HISTORY TONIGHT? CLICK TO FIND OUT MORE

And Huddersfield will make changes for the game tonight; Luke Robinson is out of their squad so Kyle Wood comes in for potentially his first appearance of the new season. There is still no Scott Grix for the Giants, whilst Chris Bailey also drops out.

Stats and Milestones
Huddersfield are undefeated in their last seven meetings with Leeds, having won six and drawn one. The Rhinos’ last victory against the Giants was a 34-28 away play-off success on 23 September, 2011.

The Giants have also won on their last four visits to Headingley, with the Rhinos’ last home win against Huddersfield coming 21-20 on 16 July, 2010.

Danny Brough has scored points in his last 13 games against Leeds (11 for Huddersfield and 2 for Wakefield). His streak began in the Wildcats’ 32-30 home defeat by the Rhinos on 10 July, 2009.