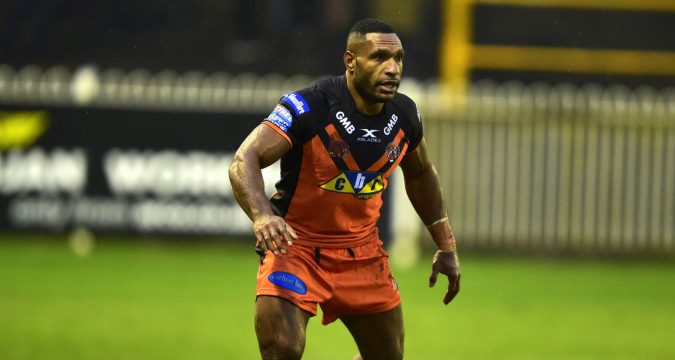 Castleford Tigers winger Garry Lo has revealed his ambitious goal for his first season as a Super League player: to become the competition’s top try-scorer.

Lo, who made his unofficial debut for the Tigers in yesterday’s (Sunday) pre-season game against Leeds, has joined the Tigers from Championship side Sheffield, where he established a reputation as one of the second-tier’s best players.

And the PNG international said to League Express he wants to be the best winger in the competition in 2018 – so long as he gets an opportunity to impress.

He said: “My target is to do what I did best with Sheffield – be top of the try-scoring charts. I have to be ambitious and I want to become the best try-scorer in the Super League. If I get a chance, I believe I can do that.”

Lo heads into life at his new club on the back of a confidence-building World Cup campaign with Papua New Guinea, where he played in front of wonderful crowds in Port Moresby.

And Lo admits he is proud of the journey he has taken from his homeland to make it in Super League.

He said: “It was my dream to play for PNG there and to be able to do that will live with me forever.

“It’s a small country but there are over 800 languages – although I know just three! I’m from a little place called Mount Hagen and I went to school there but I took a chance and went to Port Moresby to go to school and get into rugby. They got me into the PNG Hunters and from there, I never looked back.

“As time goes on, you have to learn to adapt away from home but it was tough. You struggle to understand what people are saying and that makes life difficult for you.”

Lo also revealed that with little exposure to Super League in PNG, he will be taking a traditional approach to letting his family know how he begins life at Castleford.

“I’ve watched Super League very closely for the last two years and I know I’m joining a good team who like to throw the ball around and as a winger, that is exciting for me to be involved with. I think we can make the Grand Final again.