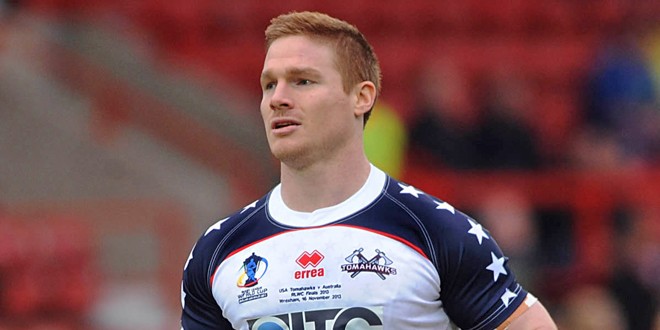 London Broncos have announced another signing for 2016, after revealing the capture of USA forward Mark Offerdahl on a two-year deal subject to visa.

Offerdahl joins the Broncos from the Tweed Heads Seagulls in the Queensland Cup in Australia. He has represented the United States on nine occasions including during the 2013 World Cup and played for Connecticut Wildcats in the USA.

He also played for Easts Tigers for three years, Illawarra Cutters and AS Carcassonne in the French Elite One Championship for two seasons along with playing eight games for North Wales Crusaders in 2014.

He had agreed a deal with Bradford last year for 2015, but that deal was cancelled before the start of this season.

“I’m very pleased to be joining the Broncos, it’s a club I’ve been wanting to sign with for a while now. I can’t wait to get there and start training,” said Offerdahl.

“The Broncos are a full time team who want to be back in the Super League and I want to be a part of that. I’ve played in a few different countries but never lived in London which is a very appealing city to live in.

“The challenge of helping London get promoted is something that excites me. It’s a big draw card to any player looking to join a Championship team. The Super 8′s idea is innovative and I’m looking forward to watching the upcoming series.”

London Broncos head coach Andrew Henderson said: “I’m really excited to be bringing Mark to the club, as a player he predominately plays prop but can play on an edge as well so gives us some versatility. I like his style of play as he can play with the ball as well as doing the tough stuff.

“Mark will also bring with him a wealth of experience from the different competitions that he has played in, many of which are a similar standard to the Championship, but he has also experienced the big stage playing for his country.

“After speaking to Mark I know he appreciates this opportunity, and has the ambition to help us get back to Super League. These are the type of player I want at this club, people that have the hunger to be better and want to achieve things with the club. I’m really looking forward to what Mark will bring to the team.”