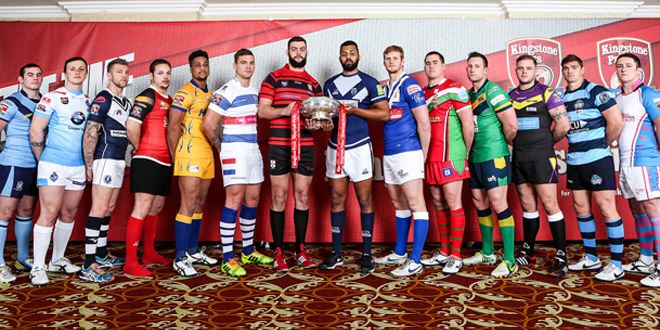 University of Gloucestershire All Golds coach Lee Greenwood was pleased with his side’s win over Oxford: “We started off really well last week,” he said. “I wouldn’t say we had the game won but went a long way to doing that. It got a bit scrappy and Oxford gave us a bit of a fright to be honest but I think we thoroughly deserved the win.

“We jumped above Oxford so obviously it’s another massive game on Saturday. Although we’re not getting any prize money from it, it would be nice to finish as the best southern team.

“It’s our third season and some of the other southern clubs have been going a bit longer than us, so if we can finish above them it would be a good achievement for us. Skolars will come marking us as a potential win so we need to do the business.”

Despite London Skolars defeat to Oldham, coach Jermaine Coleman could take some positives out of the performance: “I said to the boys last week that we’re not a bad defensive side, considering how much ball we don’t have. At the weekend I think we had 14 sets in the first half and completed seven and after 37 minutes we were only 6-0 down. If we learn how to hold onto the ball and start making other teams defend a little bit more, then all of a sudden that points difference might come down.

“In the games we have managed to do that, the results have been fairly good.

“Gloucester came to our place and gave us a bit of a rude awakening and for 20 minutes blew us away. We were probably never in the game after that. The challenge is there for us, we know what we’re going to come up against. Defensively they’ve got really good line speed, their wrestling is excellent, they carry the ball and mean it when they carry it.

“Physically we’re going to have to be up for that challenge this weekend but we also need to be mentally switched on and make sure our completion and finishes to our sets are positive.”

Prop Anthony Cox is doubtful with a hamstring problem

Following the 38-24 loss to University of Gloucestershire All Golds, Oxford coach Tim Rumford said: “We had a bit of a hangover from the previous week and after the first 20 minutes we were 22-0 down. I was fearing the worst but the team showed a bit of character in the second half. It’s disappointing we didn’t start the game as we finished it. If we’d have started the game more positively, we’d have come away with a win.

“But credit to Gloucester, they took their chances pretty well but we offered those chances up early in the game and it took us a while to realise we’re not a bad side. Once we got playing in the second half we looked pretty fluent but it was too little too late.

“We know it’s going to be a tough proposition against Barrow, it always is against the northern teams. They will be looking to bounce back this week. They are what I’d call a straightforward side, they work very hard and are hard to play against and are difficult to break down.

“But we need to get our own house in order after a couple of disappointing defeats and build a bit of a push towards the end of the season. We need a performance against Barrow.”

Reflecting on the 46-28 defeat to Hemel Stags, South Wales Scorpions coach Mike Grady said: “In the first half we were the better side but in the second half we gave seven penalties away, which put us on the back foot and Hemel scored try after try. We were our own worst enemies again, so it was a little disappointing the way it went.

“It doesn’t get any easier this week. We’ll look at the positives from the Hemel game and hopefully take some of them into the game against York. They are one of the best attacking sides we’ve played this year, they’ve got a bit of flair about them and James has got them playing really well. It will be tough.”

York City Knights had an impressive win against Newcastle Thunder. Coach James Ford said: “We were really pleased to get the points last week. Newcastle are a good team who have invested heavily and got a high profile coach. It was a difficult challenge for us but one that we were well up for.

“We’re aiming to go to South Wales this week with the same mentality as we had against Newcastle. We have a lot of respect for South Wales, I’ve seen them put up some pretty solid performances of late. Mike Grady is obviously doing a really good job in difficult circumstances but they’re certainly improving. We’ll need to make sure we take our attitude with us otherwise they could turn us over.”

Hemel Stags enjoyed a 46-28 win at South Wales Scorpions. Coach Troy Perkins said: “It was good to get the win last week, it’s been a while. We played alright in the first half but were down at half-time due to a few defensive errors. In the second half I was pretty pleased with how we went. Scoring 10 tries is a great effort against anyone, we probably need to be a bit better in defence.

“But we scored some nice tries and it’s something to build on this week. Coventry beat us convincingly at their place, we were pretty poor that day so we’ll be looking to get one back. We’re both on the same amount of points. I think all the southern teams are hoping to be top of that particular group at the end of the season so this game might go a long way to decide that.”

Coventry Bears coach Tom Tsang said of their defeat to Rochdale Hornets: “I thought we were unlucky to go in down at half-time. Every opportunity Rochdale had and took was off the back of a penalty or an error. I thought that we held our own for that first 40 minute period and scored some good tries ourselves.

“They scored at the end of the half to give them the lead but at the very least we should have been even at half-time. We were much the same for the first 10/15 minutes of the second half but then lapses of concentration and a couple of injuries in our backline, which meant we had to reshuffle, disrupted things. We gave away five penalties in 15 minutes and Rochdale just ran away with it in that period.

“But there were a lot of positives in terms of that first 50/55 minutes that we can take away. That 80-minute performance is something we’ve been searching for all season. It’s been elusive so far but we’re getting closer.

“Hemel will be fired up themselves, they won last week so they’ll be confident and wanting to get revenge for losing to us earlier in the season. It should be a good game.”

North Wales Crusaders had an impressive 23-6 victory at Barrow Raiders. Coach Anthony Murray said: “It was a great result for us at Barrow, they’ve made it a bit of a fortress this year at Craven Park and we went there and did a number on them, which I was really pleased about. The lads worked hard and we got something out of the game, which was pleasing.

“Obviously Oldham are at the top of the league and are the in-form team in the competition. It’s going to be a real tough game for us. I’m sure they’ll be wanting to get one back on us having beaten them twice this year. I’m expecting it to be a close encounter and hopefully if we stick to our structures and do what we need to do, we’ll get something out of this game. It’s going to be a big challenge and a big ask but one that we’ll relish.”

Scott Naylor’s Oldham side ground out a win at London last week: He said: “London’s not an easy place to go, it’s a long journey and they are a very big team, probably the biggest in the league. It’s not easy getting there and it’s not easy when you’re there and the weather didn’t help so the result was more pleasing than the performance.

“I think North Wales away is the hardest game of the season. They’ve been beating everybody and I think only Rochdale have turned them over recently and that was only by two points. They are a team full of confidence with some very good players. I think they were favourites to win the league before the season started. They are now third in the table so it’s as tough as it gets but if we want to do well in the competition then we’ve got to go to North Wales and give a good account of ourselves.”

Keighley Cougars slipped to second after their defeat by Swinton Lions. Coach Paul March said: “I thought defensively we switched off at crucial times and offensively it was probably the worst game we’ve played with ball in hand. We need to fix that up going into this week’s game, which is another tough one.

“The hurdles that we’re jumping over are getting a bit bigger with the amount of injuries we’re picking up. In the last two weeks we’ve lost Ash Lindsay with a broken leg, Paul Handforth with a torn calf and Scott Lee broke his arm at the weekend. That’s in addition to the loss of Shaun Leaf, Jode Sheriffe and obviously Danny Jones as well. But if we stick together and keep jumping these hurdles it will make it a bit sweeter once we hopefully achieve our goal.”

Newcastle Thunder’s performance against York City Knights was their worst of the season according to coach Stanley Gene: “I was very unhappy,” he said. “We’ve taken some beatings throughout the season but that was one I couldn’t take. York on the day played really well.

“Keighley also lost and they are a good team who will be looking to be getting back to winning ways. We’re soul searching and want to get back on a winning track so it will be a very interesting game.”

Swinton Lions coach John Duffy said of the win at Keighley Cougars: “It was a big result for us. Keighley have been the most consistent team, so it was good to get a win up there. Rochdale turned us over quick easily at their place so it’s going to be another really tough game. Obviously we’ve got home advantage but we’ll have to prepare really well this week and come up with a good game plan to beat a really good side.”

Second row Darren Hawkyard is out with a knee injury but prop Josh Barlow and loose forward Tommy Gallagher return.

Despite Rochdale Hornets’ win over Coventry Bears, coach Ian Talbot said: “We made it tough for ourselves last week, both with and without the ball we were scratchy. We spoke at half-time what we needed to put right and credit to the lads they did it in the second half. It wasn’t a complete performance. When we were good we were very good but when we were bad we were very bad.

“We’ve got Swinton this week who are very close to us in the league table so it becomes even more important this week to put in a performance to get the result. They’re a quality outfit with experience across the park and a couple of ex-Hornets in the backline in Stuart Littler and Shaun Robinson who are both playing very well this season then there’s the experience they’ve got through the pack who are well led by Jordan James.

“They’ll be a tough nut to crack this weekend and we know we’ll have to be at our best.”