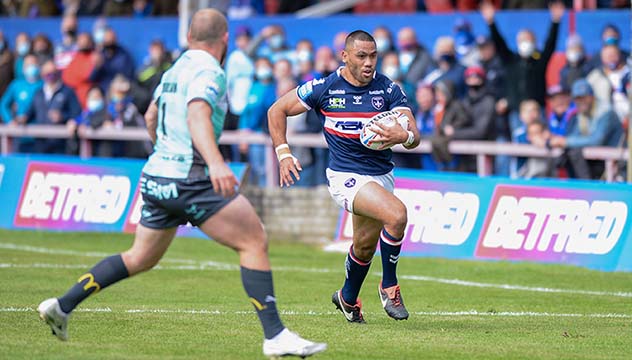 Chris Chester wants Wakefield to develop a nastier streak as they aim to get back to winning ways at home to Wigan on Thursday.

Having completed a hat-trick of Super League victories over Hull KR, Huddersfield and Leigh, Trinity lost to Warrington before a disappointing 18-12 derby setback at home to Castleford, who have now won 15 successive matches against their neighbours.

The Tigers led 10-6 at the break thanks to tries from George Griffin and Jordan Turner either side of Jacob Miller’s score for Wakefield.

Michael Shenton exploited an error by Max Jowitt for Peter Mata’utia to stretch the lead before Miller’s second try.

“They were a lot smarter in the ruck and we were probably too nice,” said Chester.

“I also thought there were tough calls out there, which didn’t help.

“Reece (Lyne) is adamant that Jordan Turner didn’t get the ball down, but it’s just one of those things.

“We could have asked why the referee didn’t go to the screen, but we just weren’t good enough.’

Chester added: “We just needed some calm heads, the last play summed it up. We had good ball but threw it into touch instead of landing it on Tom Johnstone.

“We were our own worst enemies, even though I thought we started the game really well, but I’m really disappointed to concede two tries from kicks.

“The one in the corner with Max Jowitt broke the spirit, as we’d had a really good defensive attitude up until then and we just needed to do better.”

Wakefield, meanwhile, are being strongly linked with a move for Huddersfield halfback or fullback Lee Gaskell.