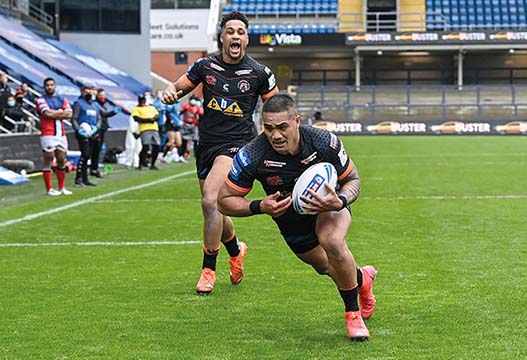 Daryl Powell praised Peter Mata’utia’s performance as Castleford won at Wakefield last Wednesday night, the day after it was revealed that both the Samoa international centre and backrower Oliver Holmes will follow their coach to Warrington next season.

Mata’utia, 30 who scored a second-half try in the 18-12 success, has agreed two-year terms with the Wolves and Holmes, who also played against Trinity, a three-year contract.

Warrington confirmed in April that Powell, Tigers coach since 2013, will succeed departing Australian Steve Price on a three-year deal.

Castleford are desperate to land a trophy in his final season at the helm, and having reached next month’s Challenge Cup final, in which they will play St Helens, they have now chalked up five wins from ten Super League matches.

Powell felt Mata’utia, who is set to face his younger brother Sione at Wembley, was central to the triumph over neighbours Wakefield, which broke a run of four league losses in succession.

“I thought Peter put in a big performance. His carries had a lot of punch,” said Powell.

“They defended him pretty well initially, but that adjustment to come on the inside for that try was really good.

“I thought he had a really strong game on both sides with and without the ball.”

Powell was forced to make mid-match changes after halfback Gareth O’Brien limped off with a knee injury, while hooker Jesse Sene-Lefao also picked up a hamstring problem).

“It was hard work and a tough game and you could see it was attritional with the heat, which the players aren’t used to,” he added.

“Then we lost Gaz and were forced to reshuffle. I thought the boys did really well to win the game.

“We’re not all singing and dancing, we lacked fluency, but we were better defensively, which was important. We won the game and that’s the most important thing for us.”

Castleford host the Catalans on Thursday.