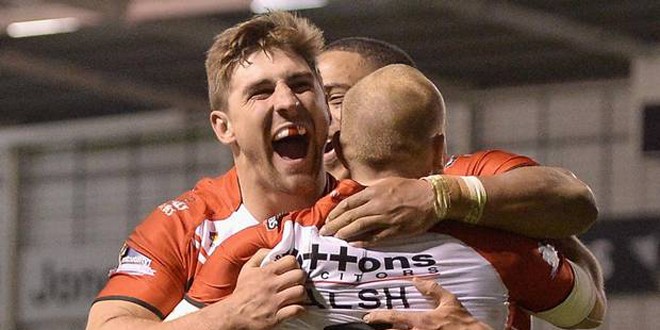 Luke Walsh starred on his Super League debut as St Helens thrashed Warrington Wolves in their own back yard.

The scrum half, who signed from NRL outfit Penrith Panthers last Summer, controlled the game with sharp passing and clever kicking, finishing with an unblemished 7/7 conversions and a last-minute interception try, which gave him an individual points haul of 18. Additionally, he kicked a huge 40/20 to set up Kyle Amor’s first St Helens try.

Alongside Walsh, youngster Gary Wheeler, described as the most natural stand-off in the Saints side, was also impressive, and used his evasiveness to create a try for James Roby in the first half.

In contrast, Warrington seemed to lack halfback creativity and their kicking game was very poor. They also seemed to lack a clinical edge, scoring just two times thanks to Joel Monaghan, who finished the Wolves’ only good move of the match in the second minute after a Willie Manu knock on, and went over after an overcooked kick hit the posts and bounced back into Warrington hands.

That says a lot about the Saints defence, which was superb throughout, but there is no doubting Warrington look much less potent than they did in 2013.

You can’t help but think not replacing Lee Briers could come back to hurt them. Indeed, Lance Hohaia, who was out of the matchday 17 last night, went up to Briers at half-time and said something to that effect.

It is also clear that the Wolves have lost a great deal from their pack, too, with Adrian Morley and Garreth Carvell exiting in pre-season. Although Tony Smith brought in Roy Asotasi, who was solid on his competitive debut, and Chris Hill is an England stalwart, they don’t have much front-row depth anymore.

It goes without saying that the home side lost the forward battle and were made to look very amateurish on several occasions, often stood flat footed and in a disorganised fashion.

Saints, on the other hand, looked organised, energetic, fit and dynamic. It’s early days yet but it’s clear to see that Nathan Brown has enough at his disposal to make a charge on the Grand Final this year.

Tony Smith, conversely, will be much less confident in his chances, though the return of Matty Russell from injury could help the cause. With Ratchford filling in at full-back for the Scotland international, Michael Monaghan, a hooker, played at stand-off. Giving Ratchford the freedom to attack could have been the missing link.

How it all panned out

2′ Warrington ruthlessly punish a Willie Manu knock on with just over a minute on the clock. Joel Monaghan goes over on the right side.
12′ Jordan Turner unleashes one of the best back-hand offloads in recent history to send Tom Makinson over for the equaliser.
16′ Gary Wheeler evades three defenders and sends James Roby over under the sticks.
20′ A Walsh 40/20 catches Warrington napping and Kyle Amor stretches over.
38′ Luke Walsh penalty.
42′ A James Roby short ball sends Anthony Laffranchi over for Saints’ fourth try.
68′ A poor Gareth O’Brien kick clatters into the posts, wrongfooting Jonny Lomax and allowing O’Brien to regain and pass to Joel Monaghan who slides over.
72′ Lomax and Percival combine to send speedy winger Adam Swift over in the corner.
78′ Walsh intercepts a Ben Westwood pass and sprints to the line. Tony Smith
“That’s the risk you take [playing only one pre-season friendly]. We could have had three or four friendlies but by the end of the season, we’d have only half our squad left standing.
“Most teams go in with one friendly. You use the first few rounds as your warm-up games.
“That’s due to the length of the season. If we had shorter seasons, we’d have more warm-up games and hone our skills a whole lot better.
“We’d like to think we’ll get better over the next few weeks.”

Nathan Brown
“You’ve got to highlight the fact that Warrington had three of their best forwards not playing tonight.
“One of Warrington’s great strengths in the past four years has been their bench and, with their full-back not playing, it obviously pushed Stefan Ratchford back and they want to play him at six.
“So they had a lot of influential players missing. Warrington will be a very good side again.
“If we are playing Warrington at the end of the year and beating them, we’ll be very happy.”

Tweets of the night

Ben Cockayne
Walmsley for England this year!! You heard it here first!! #monster

Paul Sculthorpe
Great debut from Luke Walsh tonight, sign of a great player..all the time in the world!

An in-depth report of this game, complete with stats, player interviews and stunning imagery can be found in Monday’s League Express newspaper.