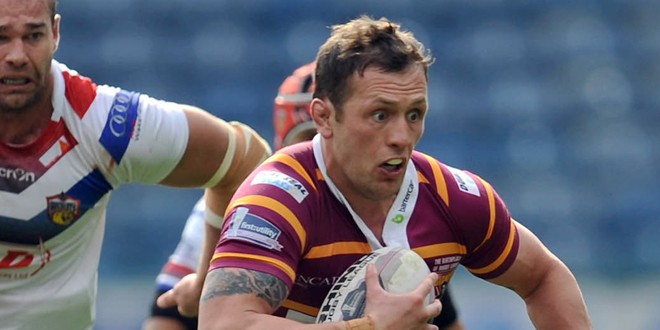 Hull Kingston Rovers have signed Shaun Lunt from Huddersfield Giants on loan for the rest of the season.

The former England international hooker is out of contract with the West Yorkshire club at the end of the year and has now been allowed to link with the Robins for the remainder of Super League XX, who earlier this week confirmed that Australian prop forward Michael Weyman would retire immediately because of a chronic knee injury.

A key part of the Huddersfield side which won the League Leaders Shield in 2013 and a try-scorer in the 2009 Challenge Cup final, Lunt is expected to go straight into Chris Chester’s squad for Sunday’s clash with the Catalans Dragons at the KC Lightstream Stadium.

Speaking to www.hullkr.co.uk about the move, Lunt said: “Things have not gone as planned at the start of the season with Huddersfield and I’m very grateful for this opportunity at Hull KR.

“I’m 27 now, I’m in the last year of my contract and I need to be playing regularly, so I want to take this chance with both hands.

“I want to come here, keep my head down and work hard, and do my business on the pitch. There’s some great players here and the club has always played an expansive style of rugby, so hopefully I can add to that for the rest of the season.

“I know a few of the boys already like Benny Cockayne, James Donaldson and Graeme Horne, but I’m looking forward to meeting the rest of the lads and getting stuck in. I’ll be putting my name forward for Sunday and hopefully I can take part.”

Lunt has scored 65 tries in 122 Super League appearances both for the Giants and during a brief loan spell at Leeds in 2012.

A Grand Final winner with the Rhinos three years ago, Lunt is also able to play in the back row and will start training with the Robins tomorrow, with head coach Chris Chester expecting him to be a valuable addition to the squad.

“We’re thrilled to have Shaun on board for the rest of the season. He is a quality player with plenty of experience at the highest level and I’m sure he’ll fit right in,” said Chester.

“It was disappointing to lose a player of Mick’s calibre but we’ve acted quickly to bring in Shaun and strengthen a key position for us on the field.

“He’s a strong defender and a real threat out of dummy half. Hopefully he’ll add another dimension to our play and we’re really looking forward to working with him.”

Hull Kingston Rovers CEO Mike Smith added: “I’d like to thank Huddersfield for acting so quickly and giving us the chance to get bring Shaun into the club before Sunday’s game.

“We have a strong relationship with the Giants and they have been honest and professional with both ourselves and Shaun throughout the whole process.”