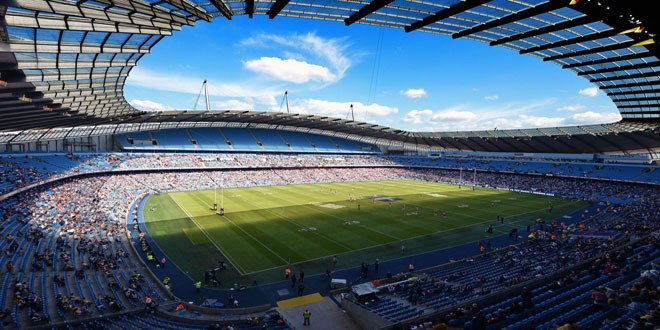 The driving force behind the side looking to bring professional rugby to Manchester believes the Rugby Football League’s relocation to the city can only be good for both the sport’s growth in the area and their own aspirations.

Manchester Rangers founder Phil Fitton has told League Express the club recently tried once again to enter a professional team into the RFL’s ranks, before being refused.

However, he is hopeful that the governing body’s move to the world-renowned Etihad Campus will strengthen their links with the RFL – as well as providing the sport with a significant boost in the Manchester area.

He told League Express: “We’re already doing our best to create a brand in Manchester, but for us to be able to now say we’re based at the national centre for the sport is phenomenal. We’ve had a bit of interest social media-wise through people we’re associated with, and it’s very exciting to see the RFL come here.

“The entire Etihad Campus is incredible. They’re a mega group who have spent billions on enhancing it, and they’re going to spend a lot more. The facilities are second to none – you won’t find anything better anywhere in the UK.”

Fitton also remains hopeful that, despite being knocked back 12 months ago by the RFL in regards to entering a team in the professional structure, they will one day be given the green light to do so.

“We submitted an application 12 months ago with all the information the RFL needed, and we were given a polite reply that there simply wasn’t any room,” he explained.

“They said they’d keep us informed but as far as I’m aware, there is still no room.

“I know that they’re talking about more North American sides with an emphasis on self-funding – but there are rumours about the number of teams being reduced.

“We don’t know where we fit, in truth, but if we position ourselves the best we can, hopefully someone within the organisation will take notice.”

On their relationship with the RFL, he added: “We work closely with the RFL already and it will enable us to work even closer with them now.

“I already pester them plenty about trying to get a professional side, and I won’t have to go too far to do so now!

“But that aside, and taking away our ambitions to play professional rugby, there’s now a level of rugby expertise on our doorstep which we can tap into. I can only see it being good for the sport in Manchester.”