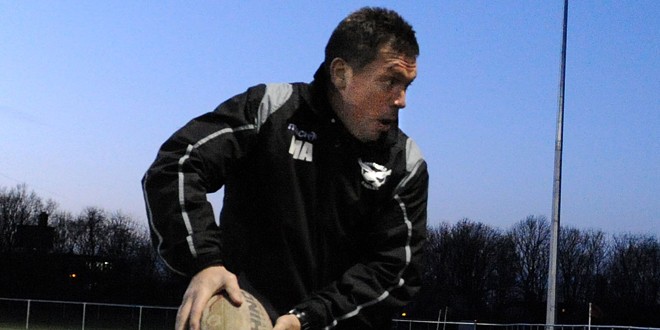 In an era where some clubs change their coaches on an annual basis, Sheffield’s Mark Aston reached a remarkable milestone against Swinton on Saturday.

Aston was at the helm for the 500th time, having been in charge for the newly launched club’s first ever game at Chorley Lynx in 1999.

During that period he has overseen promotion and two Championship Grand Final wins, as well as a host of other notable achievements.

The club marked the landmark figure with a host of fascinating stats compiled by Eagles statistician Nigel Borham, starting with that December afternoon at Victory Park just over 16 years ago.

Aston said: “I remember plenty about that because I lost my two front teeth!

“I’d had 15 years as a professional and it never happened, and then in the first game for the new club it did.

“It was between Christmas and New Year and I had to go to the emergency dentist to put them back in.

“We’d only had three weeks to get a team together, and when we got to Chorley there was a problem with the kit and we had to play in their away shirts.

“But we won that first game – and who would have thought that was possible?

“There are plenty of fond memories, and from there to where we are now has been a remarkable journey.

“There have been some dark days as well, but bit by bit we’ve developed the club over the years.

“We got to our first Grand Final and lost to Keighley and a dubious try, and then the likes of Jordan James and Andy Raleigh left and we had to rebuild again.

“We got to the 2006 Grand Final where we beat Swinton, and then there’s been the progression over the last ten years that saw us become back-to-back champions in the Championship.

“Last year we finished seventh in the middle eight and ended the season with a win against a Super League club in Wakefield.

“That just shows that 16 years of hard work can make it all worthwhile.

“I don’t tend to look back much; I’d rather keep looking forward and you forget how many matches you accumulate.

“Sheffield Eagles has always been a big part of my life, and when we set off on this journey 16 years ago we had nothing.

“I’m immensely proud of the achievements of the club during that time, and it’s not only me – it’s guys like Ian Swire, John Whaling, Ian Anniss and Chris Noble, who have been there from day one as well.”

There is one notable negative for Aston at present.

“The only downside is that we’ve come full circle in one way,” he explained.

“We built up our development system to the extent where we have players in the first-team now that have come through our scholarship.

“Now we find ourselves back with just the first team due to the decision not to grant us a tier-two Academy side.

“You never think you will lose teams once you set them up and that’s been heartbreaking.

“But it won’t stop me starting it all up again, even if it has to be under some disguise, because that’s what I’m in this for.”

So with the Eagles now full-time and ultimately pushing for a return to Super League, could Aston see himself at the club for another 500 matches as they look to the next stage in their development.

“I think at that time I’d want to become a mentor – I think what Wakefield have done with John Kear makes sense.

“I really think that there’s a massive weakness in the game here that young coaches don’t tend to have mentors. They have to find their own way when they should be getting support from people who’ve been at the top level.

“You can’t buy that experience, and I think I’ll always be involved in some capacity.”