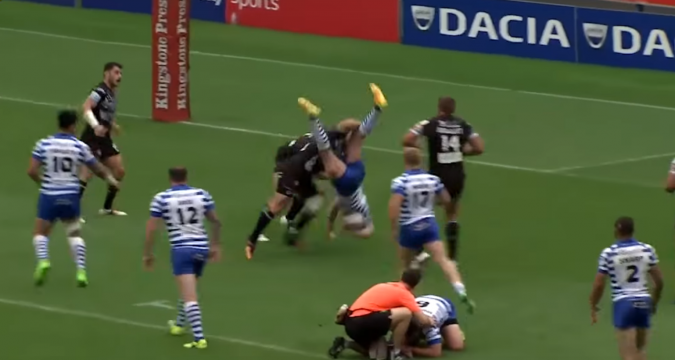 Halifax head coach Richard Marshall believes Catalans were allowed to overstep the mark by the officials in the Dragons’ victory over his side.

The Fax coach was left aggrieved with a number of tackles during the contest, while also claiming Greg Bird could have been sent off for a spear tackle on Ben Heaton.

Bird was shown a yellow card for the incident, while Marshall was also left frustrated with a number of other tackles, with halfback Scott Murrell left on the floor on three occasions.

A tackle by Vincent Duport on Shane Grady also received criticism by Halifax supporters, although the tackle was not penalised.

A number of the incidents, which can be seen in the video above, left Marshall frustrated.

“I felt the spear tackle was horrendous if I’m honest,” Marshall said.

“I’ve seen tackles like that red carded, especially this season with the dangerous tackle being clamped down on.

“I did think they put our key players under immense pressure today, with and without the ball.

“There was two or three real late ones. Scott Murrell has a neck injury there. There’s plenty of time, he’s not elusive or quick. It’s not ill-timed, there’s a bit more to it than that, a bit more cynical if I’m honest.”