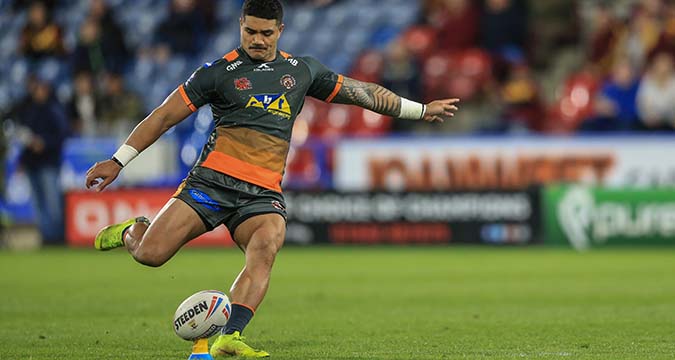 Peter Mata’utia has echoed brother Sione’s prediction that the pair’s Super League clashes this year will be fiery.

The duo clashed on five occasions in the NRL, with St Helens’ new recruit Sione describing them as “brutal” in an interview with League Express last month.

Now Castleford centre Peter has reiterated the family stance, although he has been warned by coach Daryl Powell not to overstep the mark when they meet.

Peter explained: “We’ve had a fair few fights in the past!

“But Powelly has told me I’m better off on the field that off it and I’ve to leave the fighting.

“Ever since we were kids, and I know my brother’s said the same in a few write-ups, we treat every player on the other team the same until the whistle goes.

“If you’ve got the opposition jersey on there are no team-mates or brothers.

“He’s the same as me and won’t treat me any different.

“My mum doesn’t like it, but I’ve told her it’s her fault for bringing us up with Rugby League!

“In the NRL when I was at St George Illawarra we played five times, and he had my two other brothers as well, which made it a bit unfair.

“I think they wanted to give me some payback from when we were younger.”

On what Sione will bring to St Helens, Peter added: “To be honest he’s an outstanding player.

“He will bring a lot of power; he’s a good backrower with good ball skills.

“He’s coming over now while he’s still young and excited to play.”

Peter’s own focus is on ensuring the Tigers improve on a below-par 2020 that saw them falter after the season lockdown before finishing eighth in the table.

“It was pretty disappointing,” he admits.

“We started the season well and played like we trained, but once lockdown hit we didn’t do what we were supposed to after we returned.

“This year there’s been a really big kick up the arse in pre-season and everyone has really turned up.

“Injuries didn’t help last season, and we’ve had that a fair bit in the last couple of years.

“But it was also about individual accountability during the lockdown.

“We didn’t do what we needed to do for when we came back and everyone knows that.

“Powelly has really put a stamp on it this time and everyone has come back really fit.”

Asked what the Tigers’ aims for this year should be, Mata’utia is emphatic in his response.

“To win something,” he says

“I don’t think any player will say during a gruelling pre-season that you’re aiming to be mid-table or to make up the numbers.

“But I’ve no doubt we have the team now to win something – I’ve expected us to make a Grand Final by now and I think this is the year.”

His own targets are more reserved initially. With the presence of Niall Evalds, Gareth O’Brien, Danny Richardson and Jake Trueman at the club, Mata’utia’s days at either fullback or stand-off now look over.

But that doesn’t mean he is taking anything for granted.

He added: “In the centres we’ve got Shenny (Michael Shenton) and Jordan Turner, and two young kids who have come back in better shape than last year.

“So it’s going to be very challenging just to keep my spot, but you don’t grow as a person without those challenges.”