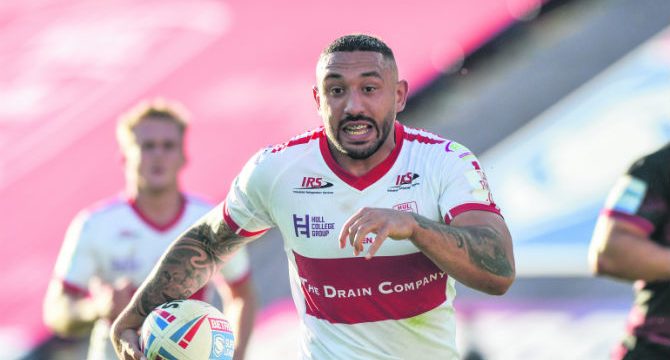 Elliot Michella has had a rollercoaster of a Rugby League career so far.

Having come through the Leeds Academy setup, making his Super League debut as a 17-year-old in 2013, controversy struck in 2015 when he and Zak Hardaker were alleged to have assaulted a Leeds student. He was released without charge, but was then sent on loan to London Broncos after having made a total of six Super League appearances for the Rhinos.

He then spent two years with Sheffield Eagles before joining Bradford Bulls in 2018, where Minchella re-established himself as a formidable second-tier star.

Hull KR coach Tony Smith identified him as a player who could take a step back into Super League, and he headed to east Yorkshire for the 2020 season. And Minchella now feels he has settled into the club and can make it his home.

“I’m really happy at Hull KR and I loved my first year here,” he says.

“It’s been strange, playing the majority of our games with no fans, so I am looking forward to a full season in playing in front of our own spectators, if Covid allows.”

The Bradford-born 24-year-old, who will celebrate his 25th birthday this Thursday, was a regular under Smith in 2020, impressing with a number of star performances in the pack – as well as filling in the halves.

“I’m pleased I played in 16 games last year; I was happy with that, but I need to kick on next season and go even better.

“It felt really good to get out on the field with a Super League side after waiting patiently for an opportunity in the Championship.

“I wanted to take the chance with both hands.”

With relegation back on the cards in 2021, Rovers may well be looking over their shoulders in the upcoming campaign, after having finished bottom in 2020. Yet Minchella and his team-mates haven’t even talked about it.

“We haven’t spoken about relegation; it’s not on our minds at all,” he insists.

“We are looking up at the table rather than down. It’s going to be a tough season for everyone, but we are confident that if we play to our abilities we will be nowhere near the drop.”

Having secured regular top-flight rugby for the first time in his career, Minchella is keen to kick on, but he is taking nothing for granted.

“My goals are to improve on last year with more appearances and be more consistent with my performances.

“We’ve made some good signings that have all come in and fit in well, so there’s a lot of competition for places and that’s good for the side.