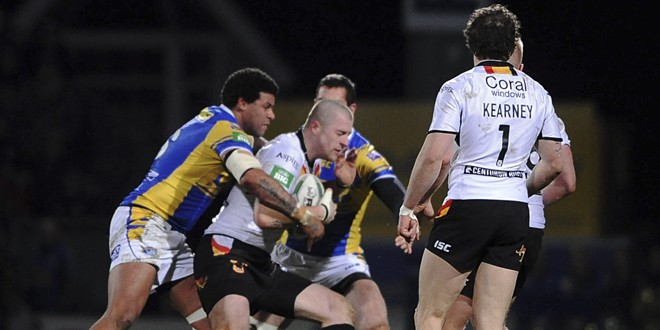 The fiercely anticipated West Yorkshire derby between Bradford Bulls and Leeds Rhinos takes place at the Provident Stadium this evening, with Bradford looking for the win that could take them off the bottom of the Super League ladder.

Still marooned on -2 points after their penalty for going into administration, the Bulls are in desperate need of points so early into the season, and are coming into the clash off the back of a defeat against Salford. They could welcome back the likes of Danny Bridge and Tom Olbison this evening, after they missed out last Friday.

Leeds are in scintillating form, and are on the back of two heavy victories against fellow West Yorkshire rivals Wakefield, winning in both the cup and the league. However, they have rested Jamie Peacock for tonight’s clash, as they look to keep the veteran fit for the busy Easter schedule.

The Stats
Leeds are undefeated in their last four meetings with Bradford, having won three and drawn one. The Bulls’ last win against the Rhinos was 12-4 at Odsal on 6 April (Good Friday), 2012.

Leeds’ Kallum Watkins has scored tries in the Rhinos’ last three meetings with Bradford as follows: 2-1-1.

Rob Burrow needs one appearance to reach 400 for Leeds. Burrow made his Rhinos debut off the bench in an 18-16 home defeat to Hull FC on 6 April, 2001.

Brett Kearney needs one appearance to reach 100 for Bradford. Kearney made his Bulls debut in a 24-12 defeat at Huddersfield on 5 February, 2010.

The Prediction
It is a tough ask for the Bulls to get anything out of this game. Although they often raise their game for the bitter derby clash, Leeds should still have too much in the tank for a Bulls side low on confidence out on the field.