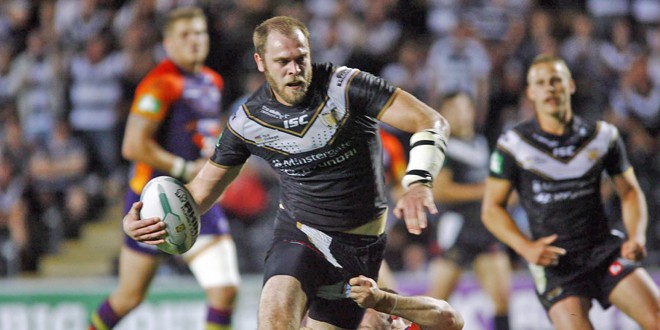 Hull FC will be looking to bounce back from their disappointing defeat at home to Widnes tonight, as they face a resurgent Salford Red Devils side.

The Black and Whites suffered the humiliation of being kept scoreless by their opponents last weekend, and they will need to rediscover their attacking spark against a Salford team who bounced back to winning ways last week, ending Castleford’s 100% record.

However, Hull are doing it tough at the moment, and they will be without captain Gareth Ellis this weekend, as he begins a two-match suspension. However, Jacob Miller and Jay Pitts both return to Lee Radford’s 19-man squad.

The Stats
Salford are seeking their first away league win against Hull FC in the  summer era – all six of their previous Super League victories have come at home.

The Red Devils have not won a Super League game at the KC Stadium, with Hull winning all previous nine meetings. Salford did record a 22-18 Challenge Cup win at the stadium in 2009 however.

Salford’s last away league win against the Black & Whites was 20-15 at the Boulevard on 7 January, 1996. Hull have won seventeen consecutive home league matches with the Reds since then.

Andrew Dixon needs one appearance to reach 100 for his career. Dixon began his career with St Helens in 2009, playing 67 games in four seasons for the club. He is currently in his second season with Salford, where he has made 32 appearances.

Francis Meli will make his 200th Super League appearance if selected tonight, having played 195 times for St Helens, and four for the Red Devils.

The Prediction
Hull are doing it tough with injuries and suspensions at the moment, and the Red Devils will fancy their chances. Expect them to go back across the M62 with a vital victory come 10pm tonight.