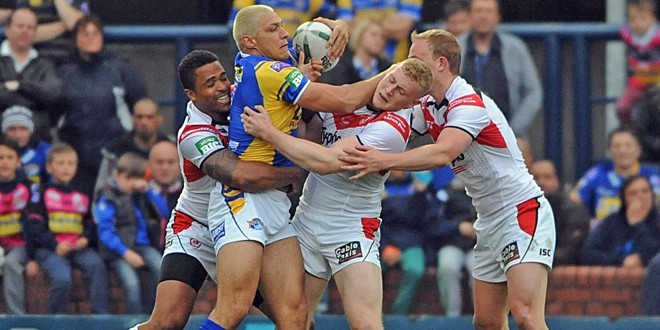 It is arguably the match of the season so far, as the only two remaining unbeaten sides in Super League lock horns at Langtree Park.

Table-topping St Helens – who have won all six of their opening games – take on Leeds, who have dropped just a solitary point so far in Super League XIX. It promises to be a titanic tussle between two sides who are used to battling it out for trophies, and it all takes place in front of the Sky cameras – and hopefully it will be a stark contrast from last Friday’s televised clash between the Rhinos and London.

After resting a raft of key players for the thrashing of the Broncos last time out, Brian McDermott has welcomed back the likes of Jamie Peacock, Kevin Sinfield and Joel Moon into his 19-man squad – although Moon faces a late fitness test to determine whether he will be fit to take part against the Saints.

Whilst Leeds are welcoming back plenty of top stars, the Saints are doing it much tougher at the moment. Luke Walsh is still out injured, and Jon Wilkin and Kyle Amor picked up suspensions during the victory over Wakefield last weekend. That means youngsters Lewis Charnock and Andre Savelio could play some part, after being included in Nathan Brown’s 19-man squad.

The Stats
Paul Wellens needs one appearance to draw level with Keith Senior as League’s all-time leader for appearances. Wellens moved into second place after starting at stand-off in St Helens’ win at Wakefield on Sunday – and is now one game ahead of Leeds captain Kevin Sinfield, who was rested for the Rhinos’ home victory against London Broncos last Friday.

Leeds’ Kevin Sinfield has scored points in sixteen consecutive games against St Helens, a streak which started in the 2008 Super League Grand Final. He last failed to score in the 2008 Qualifying Semi-Final at Knowsley Road, where he missed his one goal attempt in a 38-10 defeat.

The Prediction
As is often the case between these two sides, this will be almost too close to call. However, the fact St Helens are missing a number of key stars like Walsh and Amor could swing it slightly in Leeds’ favour – but not by much!