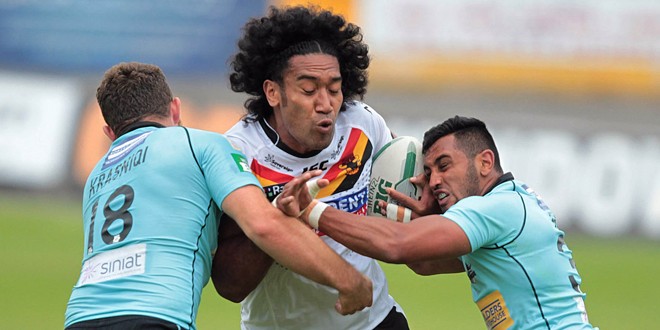 How it unfolded
First half
Scruffy first 10 minutes with few chances and a lot of errors; Adrian Purtell puts Jamie Foster through on 11 minutes with a superb pass, he offloads to Luke Gale who goes over under the sticks, Foster converts; Bradford turn up the intensity but struggle to find final product; Broncos lose Mason Caton-Brown and Nesiasi Mataitonga to injury, just what they need; James Duckworth has try ruled out for knock-on; scrum on 10m for Bulls sets up Adam Sidlow try, Foster adds extras, it’s 12-0; Thomas Minns hits back for London on 29th minute thanks to Scott Moore kick, Drinkwater converts; with just minutes to spare, Luke George goes close but is held up short and must be helped from the field with a head injury.

Second half
Little happens in 20 minutes after half-time but Donaldson makes a 20m break to send Danny Addy over under the sticks, now 18-6 and Bulls looking commanding; Matt Diskin comes within a whisker of winning it, then Adam Henry is also denied; a high kick from Josh Drinkwater on debut sends impressive young Hull hooker James Cunningham over, Drinkwater converts for 18-12; Luke Gale lands a drop-goal to put Bulls in a commanding position with two minutes to spare; Tom Olbison adds cherry on top with a late try converted by Jamie Foster; full-time 25-12.

A full report complete with live photography can be found in tomorrow’s League Express newspaper.Available at midnight online or in all good newsagents in the morning.