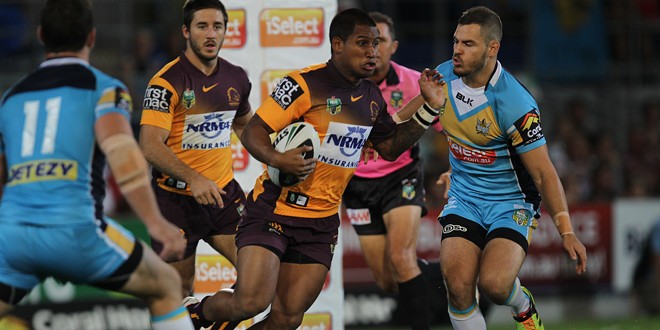 In a nutshell
The Titans remain top of the NRL after another gutsy win in which they capitalised on several Broncos errors. Brisbane, who led until the 74th minute, were scrappy at best, with returning centre Justin Hodges failing to impress after a good performance last week.

How it unfolded
31’ – Ben Hunt opens the scores after some stunning link-up play with Alex Glenn. Front-rower Corey Parker adds the extras: 0-6.

44’ – Parker extends the Broncos’ lead with a penalty goal after being tackled round the neck by Paul Carter: 0-8.

61’ – Titans full-back David Mead hits back with a superb individual effort. He scoops up a Ben Hunt grubber and races 99 metres downfield. Aidan Sezer converts to get within two: 6-8.

66’ – Ben Barba (pictured) puts in a try-saving tackle to keep the Titans at arm’s length.

74’ – But it’s not enough to keep them out, as Sezer goes over for a try that he converts to put the Titans in the lead. He collects a bomb that clattered into the posts, then was fumbled by Barba: 12-8.