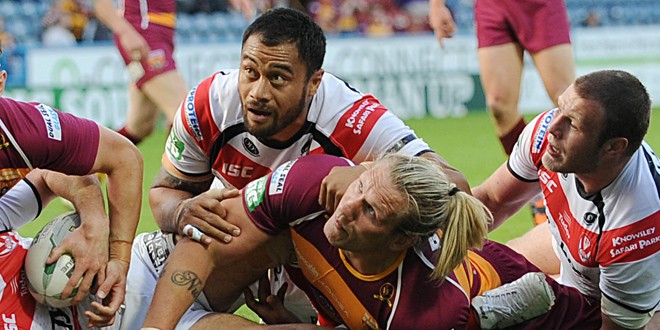 In a nutshell
A last-minute field-goal from Luke Walsh saw St Helens overturn an eight-point deficit to defeat Huddersfield Giants at home. Danny Brough insisted he had scored a field-goal just seconds before, but the referee ruled it out. In a post-match interview, Luke Walsh said he thought Brough’s effort was successful. Brough said: “100 per cent it went over. It happens too much in games like this.”

How it unfolded
8’ – A Luke Walsh 40/20 puts Saints in good position and a great pass from Lance Hohaia puts in Adam Swift in the corner. Walsh misses the kick: 0-4.

13’ – Five minutes later and Saints are in again. This time through Tom Makins. Walsh misses again: 0-8.

36’ – Joe Wardle equalises before Brough’s conversion makes it 10-8 at half-time.

57’ – Shaun Lunt grabs a second try again thanks to the video referee. Brough converts to make it 16-8.

65’ – Brett Ferres spear tackles Jonny Lomax and gets a straight red. No arguing with that.

67’ – Tom Makinson goes over in the corner soon after the sending off, and Walsh converts to make it 16-14.

74’ – A ball-steal penalty in front of the posts so Saints go for the two and level the scores.

78’ – Brough has two field-goal attempts charged down before a third goes high and is ruled out. Brough contests referee’s decision as he believes it went over. Walsh agrees after the game.

79’ – Walsh lands his first attempt to put the Saints through to the next round.