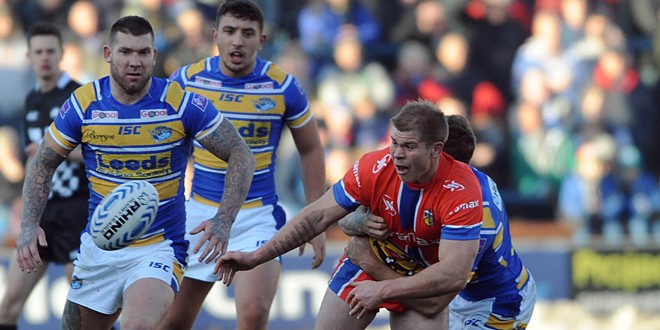 In a nutshell
Leeds Rhinos outclassed Wakefield with 11 superb tries to cruise through to the next round of the Challenge Cup.

How it unfolded
18’ – Rob Burrow opens the scoring after Leeds pile on the pressure. Sinfield converts: 0-6.

21’ – Sinfield unleashes a peach of a pass to put in Carl Ablett and extend the Rhinos’ lead. He then adds the extras: 0-12.

24’ – Rhinos lining up now and a gorgeous kick from Rob Burrow catches out Peter Fox and Danny McGuire goes over after the Rhinos regather possession. Sinfield converts: 0-18.

31’ – Paul Sykes kicks the restart out on the full and Leeds take full advantage, with Carl Ablett adding his second try of the game. Sinfield hits the post with conversion attempt: 0-26.

36’ – Wakefield’s Pita Godinet sells the Rhinos defence a dummy to hit back. Sammut converts from in front of posts: 6-26.

40’ – On the hooter, Ryan Hall collects an offload in his own half and charges to score. Sinfield converts: 6-32.

50’ – Liam Sutcliffe marks his return from a loan spell at Bradford by exploiting a gap thanks to link-up play with Kevin Sinfield. The England captain adds the extras: 6-44.

69’ – Ali Lauititi tries to put a team-mate through with a looping pass but Tom Briscoe intercepts and races to the line. Sinfield misses the kick: 6-48.