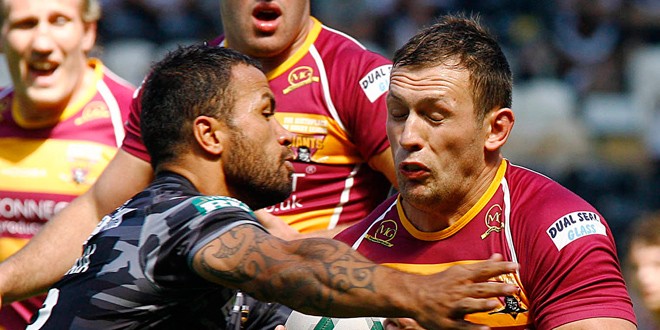 In a nutshell Hull FC took a 20-0 lead in the first 25 minutes, and set the Giants a hurdle that they couldn’t overcome as they tried to fight back in the second half.

How it unfolded Hull scored two early tries through Fetuli Talanoa and Richard Whiting in the opening ten minutes, and although Whiting could convert neither score, the Black and Whites pulled further ahead when Jordan Rankin touched down, with Whiting adding his first conversion.

And, when the Giants kicked off after Rankin’s try Hull scored a spectacular touchdown with a spectacular passing movement that culminated with Danny Houghton scoring and Whiting adding the goal for a 20-point lead.

The Giants finally got on the scoreboard just before the break, when Jodie Broughton beat Liam Colbon to touch down in the corner, with Danny Brough adding the goal from the touchline.

And although the Giants went close early in the second half, with a 40/20 and then a goal-line drop-out, it was Jacob Miller who would touch down Rankin’s kick to extend Hull’s lead to 26-6 with Whiting’s conversion.

When substitute Dean Hadley got his first Super League try for Hull after 59 minutes, following a Kirk Yeaman kick, the scoring was completed on a very satisfying night for Hull coach Lee Radford.