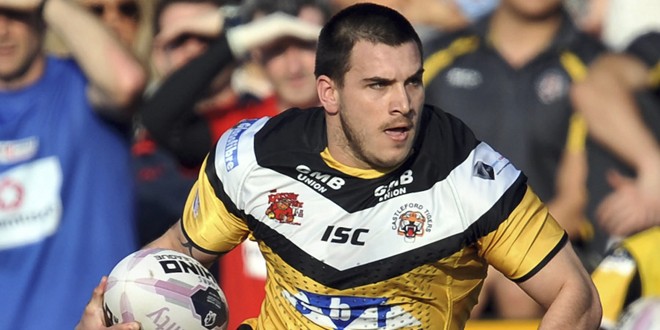 Castleford Tigers have pulled off a huge coup by tying down star winger Justin Carney to a long-term deal at the Mend-A-Hose Jungle.

The 25-year-old, who has posted 31 tries in 28 games since joining the club from Sydney Roosters last season, has signed a five-year contract with the club, with his current deal set to expire at the end of this season.

Speaking of his new deal, Carney said: “It’s a good feeling; there’s been a few stressful months trying to figure out what I wanted to do, but I knew that I really wanted to stay and I’m pleased that it all worked out in the end.

“I didn’t realise that there were so many people wanting me in their team, but I think that I belong here. At the end of the day, my family and I are happy here and that’s all that matters.

“It’s a big statement from the club and a big decision for me as I’ve secured mine and my family’s future. I’ve worked really hard over the years to try and get a lengthy deal and it’s paid off now because I’m really happy here and I wouldn’t want to be anywhere else – I just love it here.

“I don’t want to be complacent, but I can just concentrate on my footy now. When you know your future is sorted it puts your mind at ease and you can take a step back and focus on what’s important which is us winning every week. It’s not going to come easy, but that’s our goal and I’ll be busting a gut and doing everything in my power to help us do it.

“The people that I play with are my best mates off the field; they’ve made me feel at home since the day I got here. I hold most of the people here as close friends for life.

“It’s a good feeling to be a part of something like this – it’s very special, especially with the way we’re going at the moment. It was a big culture change at the start of the year with new people coming in with a lot of experience and it’s great to be a part of it.”

Tigers Head Coach Daryl Powell said: “I am delighted that a player of Justin’s standing both at Castleford Tigers and within the wider game has decided to re-sign with the club.

“Both the fact that he sees his future with us and the length of the contract is a huge statement for our club and the environment that we have created.

“Justin is a personality both on and off the field and I know all at the club will delighted with the news.”