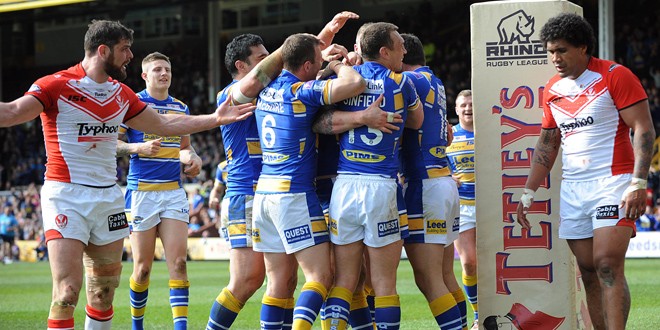 In a nutshell
The Rhinos’ backs were in sparkling form as Leeds rose to the challenge of St Helens to earn a convincing Challenge Cup victory this afternoon at Headingley.

How it unfolded
Leeds took an early lead with a Zak Hardaker try in the fifth minute after the Rhinos had won an early goal-line drop-out.

The Rhinos continued to be on top in the early stages, but Saints replied in spectacular fashion when Sia Soliola put Mark Percival into space, and he passed to Adam Swift who sped over the line and, after Luke Walsh’s conversion, the two sides were level after 15 minutes.

Leeds scored their second try four minutes before half-time when Ryan Hall did great work on the left wing, beating an attempted tackle by Walsh before handing on to Hardaker, who spun out of a tackle by Josh Jones to touch down.

Sinfield added the goal and kicked a penalty early in the second half.

And they extended their lead to 14 points with a try by Joel Moon, after Carl Ablett split the defence and Burrow carried it on. The Rhinos then spread the ball to left for Moon to touch down, with Sinfield again adding the goal.

Saints came back into the game with a try by Jones, created by Jonny Lomax after they won two penalties in quick succession.

Saints were now eight points behind, and their spirits rose when Walsh kicked a 40/20, but they were unable to take advantage, and it was the Rhinos who would scoree two late tries from Danny McGuire and Jamie Peacock, in front of a crowd of 12,194