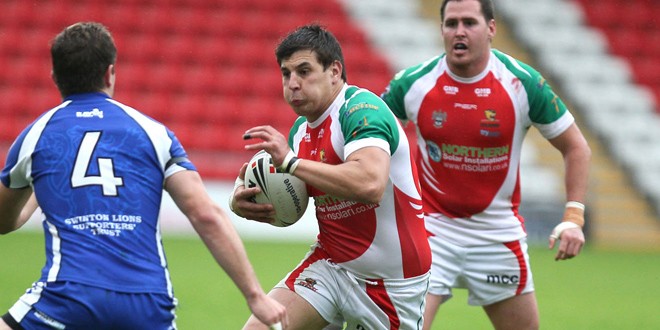 In a nutshell
Keighley Cougars will go into the last eight of the Tetley’s Challenge Cup after a thrilling victory against Swinton Lions at Leigh Sports Village, despite Anthony Bopwmanscoring three tries for the Lions.

How it unfolded
The Cougars opened the scoring when Danny Lawton touched down for a try that Danny Jones couldn’t convert.

But then Bowman got into the act, scoring two tries with Jacque Peet converting only the first.

The Cougars responded, however, with two tries from Jode Sheriffe and Richie Barnett, with Jones converting the first and then adding a penalty shortly before half-time.

In the second half they extended their lead to 16 points through tries from James Craven and Barnett, with Jones converting the first.

But Swinton weren’t finished, and reduced the margin to six points when Bowman went in for his third and Steve Lewis scored Swinton’s fourth.

But the game swung decisively against them when Keighley winger Daley Williams touched down for a converted try to put the Cougars 12 points ahead, and Paul Handforth added a late field-goal that sealed the game for the Yorkshire side.