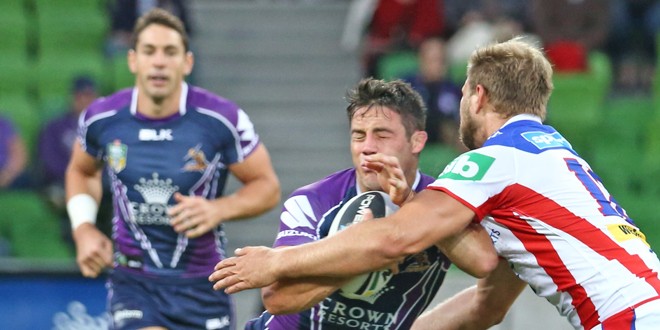 In a nutshell
Storm went joint top of the league with a solid win over the Knights, courtesy of a Cameron Smith try that killed off the spirited Knights.

How it unfolded
First half: Cameron Smith opens the scores with an early penalty; Knights hit back by taking advantage of a ricochet off the posts to take a 2-6 lead; penalty-strewn opening exchanges; Knights slot penalty to lead by six; Sisa Waqa, known as the Flying Fijian, equalises via the video referee, then soon after Kevin Proctor goes over on the right edge, Smith converts to make it 14-8; Will Chambers makes momentum count with another four-pointer five minutes before half-time; a reckless tackle on Alex McKinnon, which damaged his neck and saw him stretchered off, gives the Knights a late penalty that they slot; HT: 18-10.

Second half: Young Tonumaipea gives the Storm the perfect start to the second half with a try that Smith converts from the sideline; Knights hit back instantly through Aku Uate, Roberts converts; Uate grabs his second of the night, Gidley misses the conversion, but Knights now within four; Smith scores winning try minutes later; FT: 28-10.