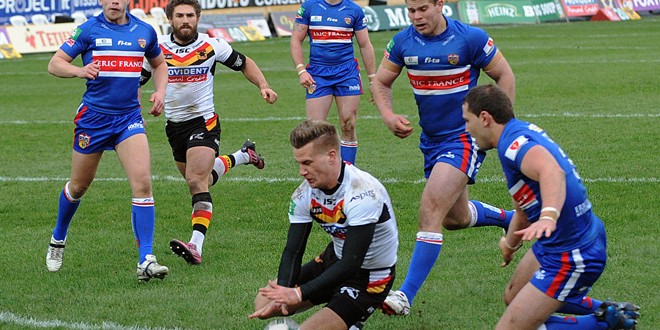 Please note: An in-depth, statistical report on this match will appear in Rugby League Express newspaper on Monday 24th February 2014.

In what was billed as an important relegation four-pointer, Bradford Bulls toughed out an ugly win over their West Yorkshire rivals in wet, soggy conditions.

Penalties and handling errors aplenty, it was by no means the purest performance of all time, but nevertheless, Francis Cummins was delighted to get off the mark with a points deduction looming.

Indeed, he said: “The pitch was heavy, but it [winning] can be as scrappy as it likes.

“It is a great feeling for the lads. We’ve not had too much to smile about and that win was priceless.”

Wakefield coach Richard Agar, who was seen seething on several occasions during the live broadcast, said: “We were poor all round and made too many errors, turning over the ball too cheaply and playing too sideways.

“You can’t expect to win a game making the amount of errors we did. It was a heavy pitch as well which affected the spectacle.”

Both coaches also slammed the Super League schedule due to having to play two games in four days.