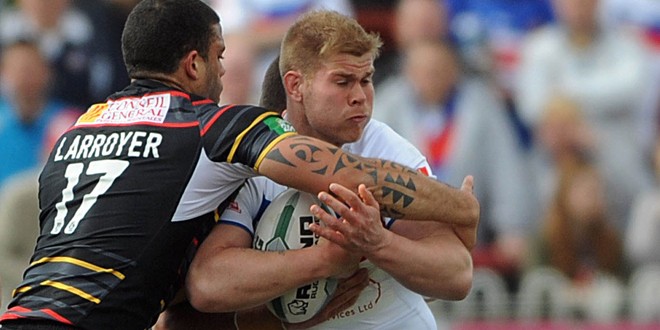 In a nutshell
A thoroughly dominant first-half performance, which featured five tries and six goals, helped Wakefield register their first points of the season in thrilling fashion, brushing aside Catalan Dragons 56-14. The French side, without 11 senior players, looked extremely poor in comparison and are now among the favourites for relegation.

How it unfolded
First half: Error-strewn opening exchanges; Brent Webb looking shaky at the back and spills a second high ball from Sammut on 13 minutes, Talima Taiutai pounces to open scoring; conversion and penalty on 19th minute from Sammut makes it 8-0 to Wakefield; Catalans struggling to get out of their half; Catalans caught offside at restart following penalty and Wildcats score on following set, Tautai getting his second after spotting a gap; three minutes later Wakefield are in again, this time it’s Molloy who crosses, Sammut maintains his 100 per cent record with the boot and it’s 20-0; Paul McShane puts in a neat grubber to send Reece Lyne over, it’s 26-0 after 27 minutes thanks to another Sammut conversion; on 30 minutes, Dragons start to work well in attack before a knock-on ruins their hard graft; back-to-back penalties for Wakefield makes count 7-1 in Wildcats’ favour; Wildcats score again, with Sammut the provider once more – the half-back chases his own kick, steals the ball one-on-one then puts Lyne in for his second; 32-0 at half time thanks to two tries from Taiutai and Lyne, one from Molloy, and six goals from Sammut.

Second half: Wildcats continue from where they left off and within five minutes Pita Godinet scampers over after selling the French defence a dummy; Godinet scores again, this time from an interception on his own line, 100 metres, and a Sammut kick, later and it’s 44-0; Dragons hit back with a stunning team effort finished by Whitehead; Catalans starting to show class now and score through veteran Leon Pryce, whose step wrong-foots everyone, now 44-10; McShane returns to the field and puts in another clever grubber to set up Daniel Smith, Sammut continues unblemished kicking record to bring up the half century; Richard Mathers puts Paul Sykes through for Wakefields’ ninth try, before Dragons have the last word through Whitehead’s second score – 56-14 it ends.