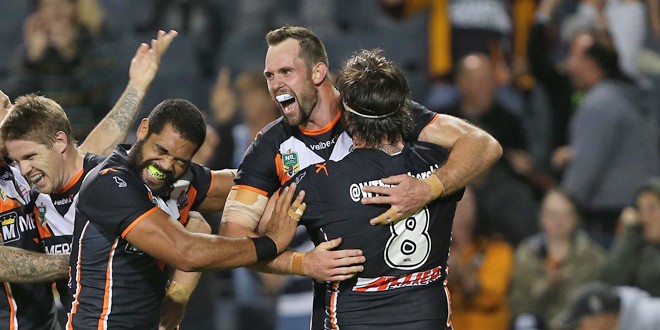 In a nutshell
The Tigers held on to win a tight game in Campbelltown, with former Wigan star Pat Richards scoring a try and two goals as they held off the Cowboys.

How it unfolded
The Cowboys took the lead on 28 minutes, when Luke Brooks dropped the ball trying to intercept a pass, and Johnathan Thurston picked up the ball and fed Brent Tate for the opening try of the game. Thurston couldn’t convert from the sideline.

After 38 minutes Tigers captain Robbie Farah equalled the scoreline with a dart from dummy-half to touch down, and the Tigers took the lead when Pat Richards added the conversion.

They extended their lead on 46 minutes, when a Farah kick hit the post and was picked up by Blake Austin, who scored on his debut, with Richards again adding the goal.

Richards then scored in the corner but failed to convert as the game entered its closing stages.

The Tigers suffered a blow two minutes from the end when skipper Farah had to leave the pitch holding his arm.

A full review of the weekend’s NRL action will feature in Rugby League Express on Monday, which will be available in the shops and online from 11.00pm on Sunday evening.