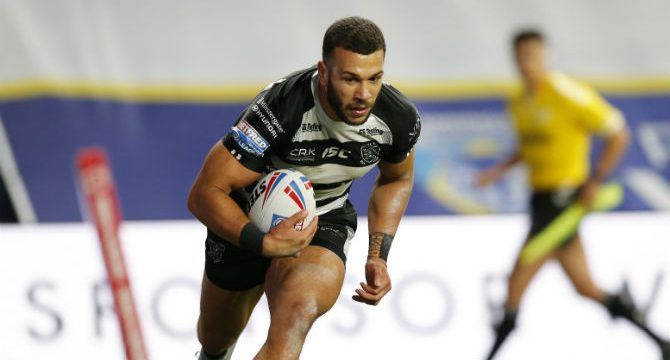 Hull FC centre Carlos Tuimavave celebrated his new four-year contract at the KCOM Stadium with a two-try performance that saw his team head into the Challenge Cup quarter-finals this weekend with a 29-16 victory over Castleford Tigers.

Tuimavave’s tries came in the first half of a tightly contested encounter, with his second coming on the stroke of half-time, when he intercepted a ball in his own half to gallop to the tryline and extend Hull’s lead to 18-6.

Tuimavave, who was adjudged the man of the match by BBC commentators John Kear and Jonathan Davies, was one of several Hull stars who had been rested from the Super League game three days earlier against Wakefield Trinity, which also saw Hull triumph 26-23.

“I’m very relieved, because it was a tough game,” Tuimavave said after the match.

“Both teams backed up from Thursday so credit to both of them.

“I didn’t play on Thursday, but it was a magnificent effort from the boys who did play. They toughed it out and respect to them.”

And Tuimavave admitted that his matchwinning moment could have gone horribly wrong.

“If I’d missed that ball, they would probably have scored in the corner, so I’m just happy it came off and it was good for us going into half-time with a (12-point) lead like that.

“This club loves playing in the Challenge Cup and we are wearing special jerseys today to remember the Cup winning side in 2005, so it was good to get the win today.”

The Samoan international, who is now 28, has extended his stay with the club to at least the end of the 2024 season after joining the club in 2016 from Newcastle Knights, going on to play over 100 Super League games and winning the Challenge Cup twice.

“I’m really happy to sign at the club long term, it was an easy decision as my family are really happy and settled in Hull,” he said.

“We love the club, the city and the fans. It is a place we have made our home and I’m fully focused now on playing my best footy for the team and seeing where the next few years takes us.

“The club is ambitious and we want to be challenging for honours and that is something I want to play a part in.

“I’d like to thank the club for their ongoing support, and to Adam (Pearson) and James (Clark) who have been great to me and my family since we got here. I really couldn’t see myself playing anywhere else.”