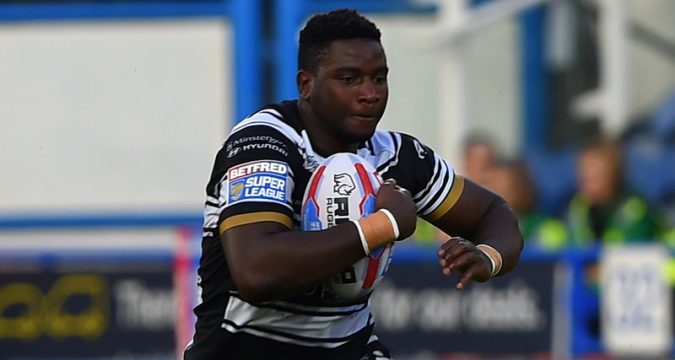 Hull FC prop forward Masi Matongo is hoping to cement a regular starting spot in the Hull lineup in 2020, even though he admits there will be plenty of competition for places this season at the KCOM Stadium.

Matongo, 23, started in Hull’s opening seven games in 2019, before copping a shoulder injury that kept him out of the side for several weeks. He eventually returned to feature in 17 of Hull’s 29 matches, with most of his later appearances coming off the bench.

“This year I started a lot of games, but I had some time off with injury and when I came back it was harder to get a starting spot,” Matongo told League Express.

“But it was nice to get a few games in towards the end of the season in the run up to pre-season.

“This season we have a lot of big names joining the club and it will be really tough to secure a place in the matchday squad. And even the younger boys, like Jack Brown and Lewis Bienek, are improving at a rapid rate to keep us all on our toes. So I’m looking at them behind me, and the established guys in front of me. Ultimately I want to get to the position that players like Scott Taylor are in, where I am an automatic selection to start the game.”

Matongo was selected in the England Knights’ squad that played Jamaica in October, although he wasn’t in the matchday 17.

But England isn’t the only country he would qualify to play for. Matongo was born in Zimbabwe, coming to England with his parents and settling in Kent, before his family moved to Hull a couple of years later.

“The UK is a much more economically stable country than Zimbabwe, and my parents just wanted me to get the best education that was available to me. That was essentially the plan,” Matongo added.

“They moved to Kent initially when I was five years old, and if I’m honest I’m not sure why we moved there. But then I believe my parents heard that Hull had quite cheap housing and we took the plunge and moved to the city. When we got there my mother studied to be a nurse and we liked it and stayed. My parents are still here.

“It was all a new experience for me. Obviously it was a bit cold for us, but we settled in quickly. I joined a school in year 4 and we didn’t have any negativity from the local people that I was aware of. It turned out I was at the same primary school as Jack Logan. We were young kids together growing up and we would later play together for Hull.

“Our transition was easier because English was pretty much my first language when I came to Hull. In Zimbabwe we spoke the Shona language, but most people were bilingual in English. So I had no trouble communicating with English kids.”

But on his arrival in Hull Matongo didn’t immediately take to Rugby League.

“At first when I came to England, like any other kid I loved watching and playing football. In the early days I never thought of myself as the biggest kid, and in fact I was a chubby kid.

“But when I turned 15 I was messing around in PE and one of my best mates persuaded me to play for the school team, Kelvin Hall, in a rugby tournament. I then found that I loved the physicality straight away, even though I didn’t have a clue about the rules. I loved the fact that it was a tough sport where I could run into the opposition.

“That was when I joined my first amateur club, which was Hull Wyke, and I was there for a couple of years before joining West Hull. Our team did really well there, and then I played open-age rugby for Norland.

“From there I got a call from the Hull Academy saying they would like to give me a trial. That was a shock for me, because until that point I had been playing with my mates and just enjoying the game and having a laugh.

“So when I went to my first Academy training session the intensity was almost overwhelming. But fortunately I stuck at it and had something like an eight-game trial. It was a game against Hull Kingston Rovers at Bishop Burton College where Rads (Lee Radford) called me over straight after the game and invited me to come and train with the first team.

“Eventually I made my first-team debut in 2015 against Wigan at the DW Stadium. I just tried to play with energy while enjoying myself. I didn’t feel any pressure at all. By the end of it I was blowing, but it felt like a great achievement.

“I didn’t get another game until 2017, when I had nine games for the first team.

“I went to Leeds for a university course in Sport and Business Management, but I couldn’t afford the time and they couldn’t get me on a better schedule so I didn’t get the chance to finish it. But you never know what might happen later in life.”

Matongo is just one of several players who were born in Africa who are making a mark in Rugby League, whether in Super League or the NRL. He admits he would be happy to represent Africa on the world stage, either in Nines or a full game, if the opportunity arose.

“I think it would be cool to be able to put the Zimbabwean flag on my chest by playing for an African side in a world tournament,” he agrees.

“Obviously I have been in this country since I was a young kid. I love England and I was lucky enough to be in the England Knights’ squad.

“But my heritage is Zimbabwean. I still have family over there and I would never turn my back on the country that I originate from and where my roots are. I still communicate with my uncles and aunts in Zimbabwe and they keep an eye on how I’m doing here. Obviously Rugby League is not big in Zimbabwe, so there isn’t massive coverage over there.”

In 2020, however, his immediate thoughts are with his club and the possibility of winning a trophy, after arriving on the scene just too late to be in their Challenge Cup winning teams of 2016 and 2017.

“Our ambitions are high this year,” he says.

“We have talent all over the field, in both the backs and forwards, and we have great talent in the reserves too, with players just waiting to make an impact and they are ready to burst through.

“So my main personal focus this season is just to make the Hull team. I haven’t thought much further than that in any representative sense.

“I don’t see myself as a young kid any more. I want to start having a presence on the field, not just a player who gets ten minutes here and there.

“It’s hard to emphasise how important this year is, both for me and the club.”