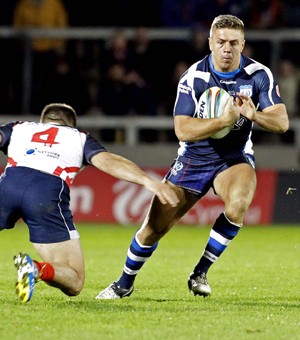 New Warrington Wolves fullback Matthew Russell wants to prove that his star performances in the World Cup were no flash in the pan as he aims to cement his place as a regular Super League starter.

The 20-year-old, who spent 2013 with the NRL’s Gold Coast Titans, was a standout for Scotland during the autumn tournament.

And now he has been named as the best new Super League signing for 2014 in this newspaper’s annual Readers Poll.

But the fact that supporters are hoping to see a lot from him this year will not change how he approaches 2014 as he looks to build on the eight Super League appearances he made in 2012 while playing for Wigan and during a loan spell with Hull FC.

“A lot of people might have forgotten about me after I’d left Wigan, so it was nice to get a few games on TV in the World Cup and show people what I can do,” Russell told League Express.

“It is nice to know that people did notice me in those games and think I’d bring something to Super League. That gives me an extra bit of confidence going into the season.

“But it won’t put any extra pressure on me because there are great players at Warrington pushing for places too, so I’m never going to think I’ve got it all sorted.

“I’ll have had a full pre-season by the time the season starts, so I can kick on from my World Cup performances and hopefully give this season a good crack.”

Russell will be making a quick return down under this week as the whole Wolves squad set off for their three-week, pre-season trip to Australia today (Monday).

While there, former New Zealand international Roy Asotasi will link up with his new team-mates. Russell appreciates the benefits both the trip and the new recruit will have on the Wolves squad.

“Roy will be a great addition,” added Russell.

“He has been involved with a lot of clubs in the NRL and has been part of a Premiership winning team. And he will bring all that experience to Warrington. He has been a really good player throughout his career and he will add a lot to our side.

“It will also be good to get back to Australia. The weather is always a lot better there, so you can get a lot of time out on the field working on your game. Being away from home will mean we’ll stay fully focused on what we have to do.

“We will all be ripping in and making the most of the three weeks out there as we prepare for the new season.”