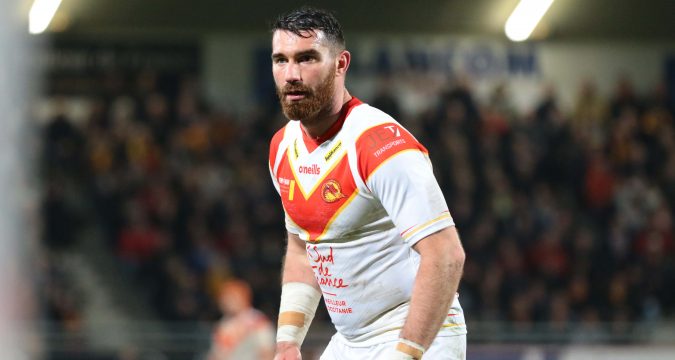 Matty Smith’s move to the south of France to join Catalans didn’t work out last year with the scrum-half making just 16 appearances before being shipped out on loan to Warrington for the remainder of the season.

So what went wrong for the former Saints man?

Smith revealed: “I think probably a number of things. Away from the playing aspect I think as a family we didn’t settle as well as what we thought we were going to do. With having three young kids we thought it was probably the perfect time to go but it didn’t work out that way in terms of not being around family.

“It was difficult on the pitch as well. I thought I started really well, had a good pre-season and felt really really good but for one thing or another it just didn’t quite work out.

“For me it got to a point where we were probably going to be happier if we went home and that’s when we made the decision for me to go to Warrington.

“I think me and Steve (McNamara) probably didn’t see eye to eye in the end and we went our separate ways. I’m still very grateful to the club for the opportunity they gave me to go over there and experience that type of lifestyle, albeit for a brief amount of time.

“I think going over there and treating it as a holiday is what we said we weren’t going to do. I had a ‘Rugby first’ mentality but it’s difficult when you get there and your kids and wife want to go on the beach. You don’t do that in St Helens, so you can get into a sort of ‘holiday mode’. Obviously you have a few beers every now and again but I wouldn’t say there’s a massive drinking culture over there, it’s just easier to do it when the sun’s out.

“For me, it was just the enjoyment wasn’t there for me. I can’t really put my finger on it. My wife and kids didn’t really enjoy it out there, they were struggling. They missed family as well so that does have an impact as well. To be deadly honest I don’t think the St Helens situation helped me because when you’re not playing and not having it go the way you want it to go, it’s difficult.

“I probably picked Catalans because they were the club I felt I could win something with, but it was also to get out of the way as well and trying to experience something new.”

After a fairly torrid season, the 32-year-old made the switch to the Betfred Championship for the first time in his career to return to the Widnes Vikings (who he had made appearances for on loan in 2008) ahead of their bid for the playoffs under new head coach Tim Sheens.

Smith discussed the reasons behind his arrival at the Vikings and his new team’s aims for the season, as well as life in the Championship: “Obviously it’s important for Widnes to get into the playoffs because then you give yourself a chance. I think that’s something that attracted me here. I’ve won things in the game but I think being a part of something special by trying to get the club back into Super League is what attracted me to Widnes.

“The game is growing isn’t it? Some of the players in it (the Championship) are really experienced players. The likes of Scott Murrell, Chris Clarkson, Shaun Lunt, the list goes on. They’ve all played Super League.

“The coaches are really experienced as well with the likes of John Kear, Tim (Sheens) and Danny Ward who’s been doing well. The competition is big. It’s going to be tough but we know that as a club. For us it’s about getting a really good start and then trying to perform consistently week in week out.”