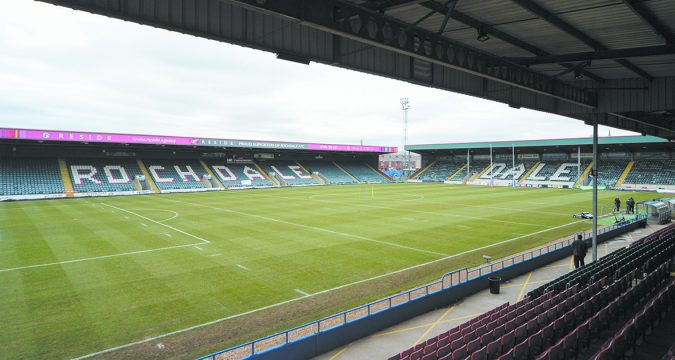 Rochdale chairman Andy Mazey believes the club has everything required to thrive in the future as the club waits to hear whether it has successfully applied for promotion to the Championship.

The Hornets are one of five clubs hopeful of being named the 14th team in the Championship next season, with a verdict to be delivered on Thursday.

Mazey took over the club in the off-season following relegation from the second-tier but believes the foundations are in place for the club to progress and return to the upper echelons of the Championship, where they previously competed in the early 2000s.

“We do believe the vehicle is right for us as a consortium and as investors to take this club forward,” he said.

“It just needed direction and investment to take it forward and I think our bid reflects that.

“We know the market, our head coach is experienced and won the competition, all the key ingredients are there and it’s not manufactured or manipulated within any of the sections of our bid. Our numbers need to increase in terms of support base but believe we have the tools in place to do that.”

A tough year on the field last year impacted on crowds, with the Hornets averaging just 770.

Improving that figure has been a key focus for Mazey since taking over, and believes things are in place to ensure that happens.

“To grow your fanbase requires a long-term strategy and engaging with your community is required.

“It’s no quick fix, so everything we’ve done since day one has been maximising community club and engagement with the brand. It was showing signs; just with the pre-season friendlies and fixtures pre-covid, we were showing an upward trend, we do feel over a period of time it’s the right way.

“There are 218,000 in our own borough and we know they’ve been there before. In the early 2000s, we had four-figure crowds so we know they’re there. But the strategy is engaging them via the community rather than hoping for some kind of quick fix. We proved at Swinton, we opened the gates, put initiatives in place and showed steady signs of growth and we didn’t have the target areas there that we do here. We believe the market size is huge.”

Mazey is optimistic that Hornets will be the successful candidate, despite competition from Barrow, Doncaster, Newcastle and Workington.

“I think we have the right balance across the sections. Currently, the playing staff have been recruited to ultimately get us to Championship and the core of the squad is capable of Championship.

“We tick all the boxes in terms of criteria and facilities. We can host broadcasters, that has to be a big thing moving forward with streaming being a big part of the future.

“Across the board, I just think we have the right balance, in recent years we’ve shown we can compete in Championship, the 2019 season was a bad one but we have been competitive.”